Marlins 9, Mets 3: This Was Not the Baseball Game You Were Looking For

Share All sharing options for: Marlins 9, Mets 3: This Was Not the Baseball Game You Were Looking For 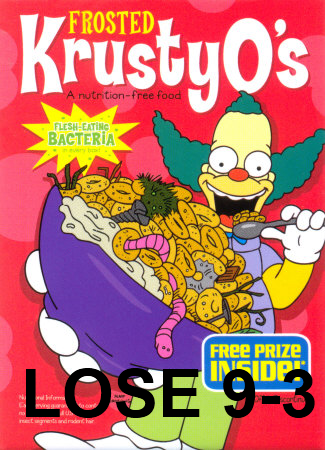 Chris Capuano hadn't started a game against Florida until Fish-a-palooza began back in the middle of July, but he was making his fourth start against them tonight. The first three went well enough, but this one was among Capuano's worst outings of the year.

It didn't look like the Mets were going to do much against Javier Vazquez in the early going, but Capuano allowed a pair of runs in the bottom of the first inning. A wild pitch by Capuano allowed the first run to score, rewarding the Marlins for sacrifice-bunting a runner from second to third with nobody out, and a Logan Morrison single plated another run two batters later. Capuano allowed the third Florida run on a solo shot by Jose Lopez in the third inning.

The Mets got on the board in the fourth after David Wright hit a triple off the Great Wall of Flushing ugly fence in left-center field and was driven in on a ground out by Angel Pagan, but Capuano's outing went from bad to really bad in the bottom of the frame. He allowed three more runs to score, the first on a single by Bryan Petersen and the second and third on a single by Shane Victorino South. Capuano finished the inning, but it was his last of the evening.

D.J. Carrasco came into the game to mop up the mess, and his outing was a great example of the unpredictable ways of BABIP. In the fifth, Carrasco allowed four hits and hit a batter but only gave up one run when a soft liner with the bases loaded went right to Nick Evans, who tagged the runner at first to end the inning.

In the sixth, however, there was no one on base with two outs when Ruben Tejada made an error to prolong the inning. One double later, a weak bloop single into center by Logan Morrison scored both runners, extending the Marlins' lead to 9-1.

Both teams were quiet with the bats for a while after that, but Pagan tripled in the ninth, just missing a home run, before Jason Bay hit a no-doubter into the left field stands. A couple of outs later, though, the game was over.

If you haven't yet had your fill of watching the Mets play the Marlins, the series continues tomorrow night at 7:10 pm with Miguel Batista and Chris Volstad scheduled as the starting pitchers. 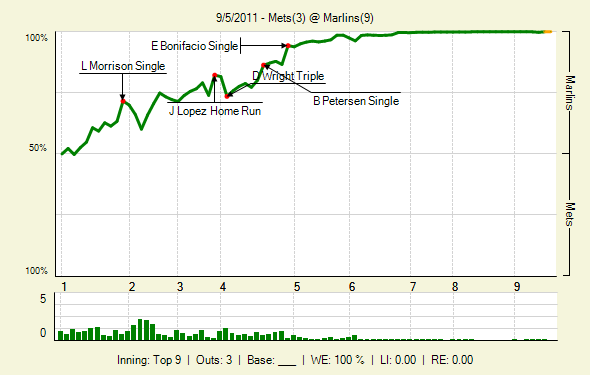