Share All sharing options for: Mets 5, Braves 6: Schwinden and Screwballs Not Enough 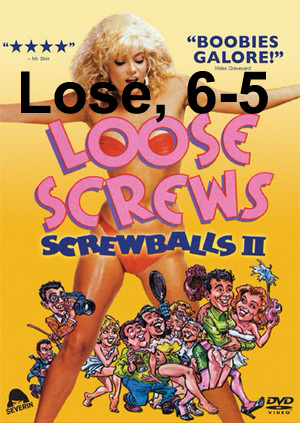 Chris Schwinden day not go schwimmingly. First, he gets the "Family Night" nickname on FanGraphs, and then he went out and laid an egg in his debut, in front of about four people. Well, he did do something no Met has done before: wear the number 63 jersey in a regular-season game. So there's that.

But back on the field, it looks like Schwinden may not have an out pitch. He got ahead 1-2 on two batters in the first and then got rocked for a couple of line drives anyway. A double, a walk, and then a big two-run double by Freddie Freeman (aided by Ronny Paulino's heads-down hands-on-hips poor defensive play and a missed cutoff man by Angel Pagan), another single by Martin Prado, and it was suddenly 3-0. With the Braves throwing former first-round pick (and lefty) Mike Minor, it seemed like it might be a long day at Citi Field.

Ah but they had to play like eight and a half more innings. And the next half inning was not so bad. That inning saw Lucas Duda "Dudat" with a nice rope single into right field, a double from David Wright which proved that "Wright is Might" and a walk from Angel Pagan "in the Outfield" -- all with two outs. To continue the improbable theme, Jason Bay (he's moving up on the Mets RBI leaderboard with 48!!) slammed a hanging breaking ball for a grand slam. Whoah. Two of his four career grand slams have come with the Mets in his worst full year. Double whoah.

That seemed to help Schwinden right the schip in the second. He even got a schtrikeout in that inning, allbeit one that was on a ball below the knees. The third inning saw Larry Wayne Jones deposit a thigh-high cutter into the seats to tie the game. Then the curve, which was working for a minute, was hit (if not smoked) for a few bloops off the bats of Freddie Freeman, Martin Prado and Jason Heyward and the Braves were ahead again. All the schweatiness in the world wouldn't put more movement on the ball, though. Amazingly, he also got three strikeouts in the inning, and two were even schwinging.

The fourth and fifth were snooze-able other than a long double from Lucas Duda. That crack of the bat was a shot of coffee, but it didn't last long, as it came with two outs and David Wright flied out. The ox is not a dud, though, not at all. Schwinden ended the day after five, having given up five runs on four strikeouts and a walk. Seven swinging strikes on 100 pitches, 34 cutters, 30 4-seamers and a collection of curves, sliders and changeups. Nothing averaged 91 MPH. Thanks for the effort rook.

In the sixth, Daniel Ray Herrera made his home debut, showing off his screwball and slider (curve? slurve?) combo and towering over the mound. Two strikeouts, a groundout and three fly outs later, and he seems like he might be a fan favorite. That screwball moves the "wrong" way, and is sweet to watch. Even if it takes a while to get to the plate. Any pitch that was last employed by Tug McGraw in the blue and orange is going to go over well in Queens. Plus, the hair!

Nick Evans made a good play in the eighth, Lucas Duda made a bad play in the eighth. The Mets ended up giving up a run after Ryota Igarashi and Tim Byrdak conspired to suck. Then the team had to face the best bullpen combo in the league, Jonny Venters and Craig Kimbrel, down two runs.

Against Venters, they managed a walk (by Wright), a single (by Bay), and a sacrifice fly by Nick Evans that briefly looked like it might tie the game. Against Kimbrel? A single by the pinch-hitting Jose Reyes. Then, two strikeouts and a line-out. Nada.

The team came up one run short, but managed to take a look at some young players to see if they can contribute in the future. One for two ain't so bad in that department.

Unintentionally Sexy Quote of the Game: "He's been doing all the little man things he needs to do." -- Gary Cohen on Ruben Tejada

Nice job by BurleighGrimes; that effort in the TWO game threads embiggens us all.