Originally signed as an amateur free agent by the Yankees in 1998, Manny Acosta never got a shot to pitch for the Mets’ crosstown rivals prior to his release in the summer of 2003. From there, he went to the Mets’ divisional rivals in Atlanta and finally made his big-league debut in 2007. He made 103 appearances with the Braves over the course of three seasons, pitching to the tune of a 3.55 ERA despite walking a boatload of opposing hitters and not striking out all that many.

The Braves decided to cut ties with Acosta just before the 2010 season, and the Mets picked him up, shuffling him between Buffalo and Queens early in the season before he became a fixture in the bullpen for the latter half of the season. In 41 games, Acosta posted a 2.95 ERA, thanks in large part to his rate of 9.5 strikeouts per nine innings. He was still walking opponents too often, though, which helps explain his 3.63 FIP and 3.52 xFIP.

Despite his strong showing in 2010, the 2011 season began in Buffalo for Acosta. It looked like he might not make it back to the Mets early in the season since he was issuing walks at an astronomical rate to Triple-A hitters, but he did get called up in June and stuck around for the rest of the season. After Francisco Rodriguez was traded, Acosta was the team’s best relief pitcher. By season’s end, he had pitched in another 44 games, finishing with a 3.45 ERA, 3.81 FIP, and 3.60 xFIP. Between 2010 and 2011, Acosta has thrown 86.2 innings with a 3.22 ERA, 9.1 K/9, and 3.4 BB/9, and he has easily been one of the most overlooked players on the team in that span. 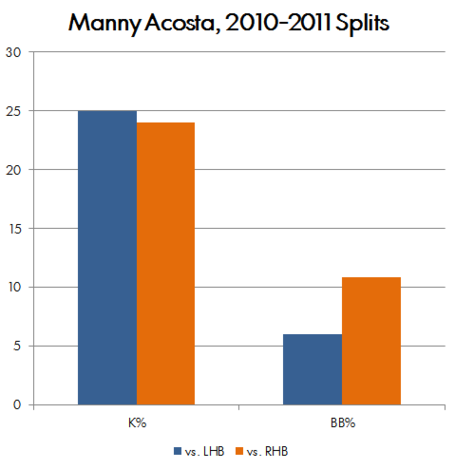 This year, Acosta should at the very least be penciled in to begin the year in the Mets’ bullpen. He’ll turn 31 in May, and it’s entirely possible that he’ll pitch as well as or better than recent additions Jon Rauch and Ramon Ramirez. He’s a hard-throwing reliever who’s shown over the past two years that he’s capable of keeping his walks at a reasonable-if-not-ideal rate. Given that he’s making a meager salary compared to his peers, Acosta should continue to be a great value out of the bullpen. To top it off, his splits show he’s been at his best against left-handed hitters over the past two seasons, which comes in handy on a team that’s entering the season with likely only one left-handed pitcher in its bullpen.