Jason Bay was drafted by the Montreal Expos in 2000 and was traded three times over the next three years, from the Expos to the Mets, the Mets to the Padres, and the Padres to the Pirates. He made his major-league debut with the Padres in 2003, getting all of ten plate appearances before shipping off to Pittsburgh, where he established himself as a premier bat as the team’s everyday left fielder. Bay hit .282/.358/.550 in 2004, easily winning Rookie of the Year honors. Aside from a down year in 2007, Bay continued to be a force at the plate through his outstanding 2009 season, which was of course spent with the Red Sox after he was traded once again during the 2008 season. By the end of his 2009 campaign, Bay had just turned 31 and had produced to the tune of .280/.376/.519 in his career.

Although there were questions about the latter years of the contract Bay signed with the Mets in the offseason prior to the 2010 season, there weren’t many people predicting he’d be a major bust at the outset. After belting 36 home runs with Boston a year prior to his arrival with the Mets, Bay hit only six in his first year as a Met before an awkward collision with the outfield fence at Dodger Stadium resulted in a season-ending concussion.

The Mets and their fans hoped that 2010 would prove to be just another 2007 blip in Bay’s career, but his 2011 season was even worse at the plate. He "hit" .245/.329/.374 last year, which was quite clearly the worst season of his career. If there’s been any bright spot in Bay’s offensive game over the past two seasons, it’s that he’s remained very efficient when stealing bases. He doesn’t run that frequently, but with 21 stolen bases and only one caught stealing over the past two years, Bay hasn’t hurt himself on the basepaths on the increasingly rare occasions that he finds himself on them. 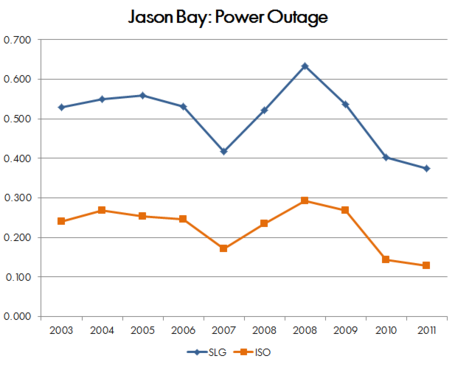 The forecast for 2012 is doom and gloom for Bay, but there will be plenty of talk about Citi Field’s new dimensions and how they might help Bay become a power hitter once again. Now at the age of 33, the odds of a bounce-back season for Bay are even lower than they were last year, but it would be pretty hard to have a worse year at the plate than he did in 2011. Even the most optimistic projections don’t have Bay hitting 20 home runs this year. Unless he returns to 2009 form, look for the Mets to strongly consider cutting ties with him after the season. His contract calls for a $17 million vesting option in 2014 if he gets 600 plate appearances in 2013 or gets 500 in both 2012 and 2013.