When he joined the Mets prior to the 2011 season, Tim Byrdak had already played for four other teams in the big leagues, dating back to a very small cup of coffee with the 1998 Royals. For his career prior to donning a Mets uniform, Byrdak had a 4.35 ERA with a pretty good strikeout rate of 8.9 per nine and an awful walk rate of 5.5 per nine. When he signed with the Mets, he was considered one of several candidates who would attempt to fill the role vacated by Pedro Feliciano when the Mets wisely decided he was too rich for their blood and let the Yankees overpay him instead.

Byrdak’s 2011 season, however, went well enough that Sandy Alderson signed him to a contract for 2012 before the season came to an end. Overall, his 3.83 ERA wasn’t bad, and he struck out a career-high 11.2 opposing hitters per nine innings, assuming his six-and-a-third innings of work in 2000 don’t qualify as a season. His success came nearly exclusively against left-handed hitters, as he struck out an astronomical 32.7% of them while walking only 5.5%, the combination of which was good for a 2.06 FIP and 2.27 xFIP. His overall walk rate was still high since he was a walk machine against the right-handed hitters he faced, but for a guy whose job was to get lefties out, Byrdak excelled. 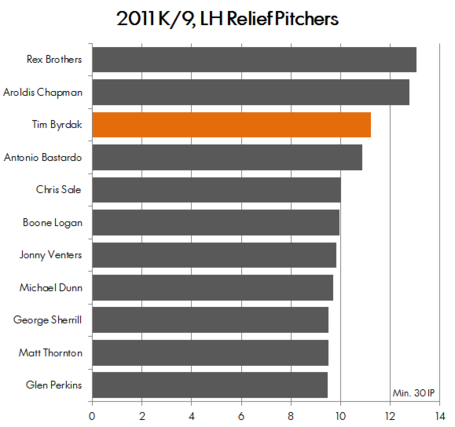 The same can be said for virtually all left-handed specialists, but if Byrdak’s exposure to right-handed hitters is limited in 2012, he should be able to turn in another good year out of the bullpen. His career splits against left-handed hitters aren’t nearly as great as they were last year, but even a return to his career norm would be good enough for his role on the team. Although Byrdak turned 38 at the end of October, he hasn’t shown any signs of physical breakdown yet, and considering the Mets’ relatively minor investment in his arm, it would not be the end of the world if he encounters an injury at some point this year.