Before signing a two-year, $2.5 million deal with the Mets last offseason, D.J. Carrasco had at least been an above-average relief pitcher. He had spent time with the Royals, White Sox, Pirates, and Diamondbacks before Arizona decided to non-tender him at the conclusion of the 2010 season. At the time, he possessed a 4.31 ERA for his career, and although his strikeout and walk rates weren’t necessarily ideal, he had shown an ability to generate groundballs and thus avoid giving up home runs. When the Mets signed him, it wasn’t particularly exciting, but he figured to be something between the last resort out of the bullpen and a medium-leverage situational pitcher.

And then came 2011. Over the course of 42 games, including one spot-start, Carrasco got shelled to the tune of a 6.02 ERA, by far his worst single-season mark since getting to the big leagues. His groundball rate dropped a bit, and his home run rate skyrocketed to 1.28, more than double the clip at which he was serving up dingers in any of the three seasons preceding 2011. To top it off, his strikeout rate went from mediocre to downright poor as he struck out only 12.0% of opposing hitters. Among the 160 relievers who threw at least 40 innings last season, only two struck out a lower percentage of opposing hitters than Carrasco. His BABIP was an extraordinarily high .355, and it was an even higher .369 if his lone start is factored out. Among the same group of relievers with 40 innings pitched last year, Carrasco's was the highest BABIP by a fairly substantial margin. 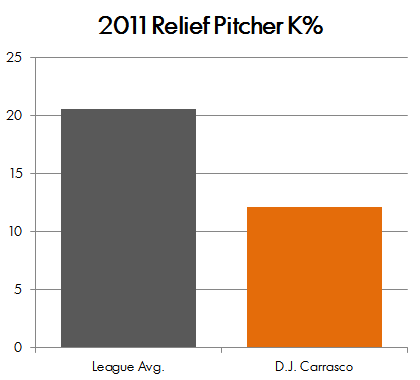 Unfortunately, Carrasco is still likely to get a shot in the bullpen to start the 2012 season. The Mets do have plenty of better relief pitchers, but if there’s any silver lining from 2011, it’s that even a full season of data from a relief pitcher is still a small sample. It's tough to look at his numbers and chalk them up to bad luck and poor defensive support, but at least some portion of his BABIP should probably be attributed to each. Given the fact that he'll turn 35 in April, it seems highly unlikely that he'll be very good this year, but a return to a season resembling his career norms wouldn't be shocking.