How do you write a player profile about Ronny Cedeno without writing about Ruben Tejada?

Because, if Ruben Tejada can manage a scratch glove and a league-average walk rate (or better), he'll combine more offense with a decent glove than Cedeno has ever managed, relegating the former Buc to a bench role.

The bench has been Cedeno's on-again off-again friend over his seven-year carer in the Major Leagues. Originally signed by the Cubs as an International Free Agent out of Venezuela at 16 years old, he had an up-and-down career in the minor leagues. He didn't normally show power, only once stole more than 20 bags, and had a wildly oscillating batting average -- but he had steady enough defense that he ascended gradually and finally got the reigns at short for the Cubs in 2006.

It didn't go that well. 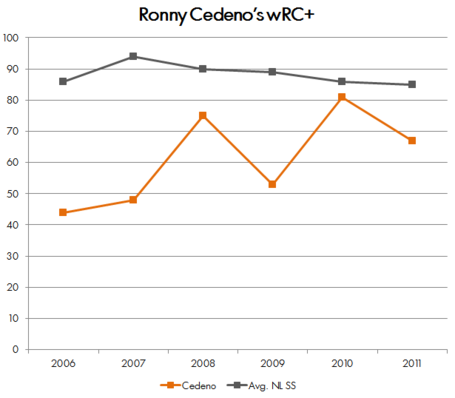 Cedeno's Pirate career did include a healthy share of playing time. He averaged over 475 PAs a year those two seasons, and he finally pushed the WAR needle past one, accruing 2.5 wins over two seasons by batting .253/.295/.362 and being a tiny bit better than scratch with the glove. Still, two wins per season is your average MLB player and .261/.314/.374 is your average NL shortstop, so he's not a first-division starter. And he's not plus enough with the glove to make up for the bat -- his lifetime UZR/150 is below scratch and he's no wizard in that department. He's better as a backup at the middle infield.

Which, if Ruben Tejada does his part, is exactly what the 29-year-old infielder will be this season.