Drafted in the first round by the Mets in 2008, Ike Davis' ascent to the big leagues was rather quick. After an unimpressive debut with Brooklyn, Davis became a force at the plate in the 2009 season with St. Lucie and Binghamton, hitting a combined .298/.381/.524 on the season. Davis should have cracked the roster to begin the Mets' 2010 season but spent ten games in Buffalo before getting the call to take over at first base.

Ike's rookie campaign with the was a success, as his ability with the bat translated fairly well to the big leagues. His .345 wOBA wasn't oustanding by the standards for offense at first base, but it wasn't exactly awful, either. And his home runs were almost all of the tape-measure variety, which certainly provided some cause for hope for his future. On top the laser shows, Ike looked like a very good defensive first baseman. Although the metrics were based on a small sample of data, the early returns agreed with the eyes.

Through thirty-six games in 2011, Ike hit to the tune of .302/.383/.543, good enough for a .391 wOBA. Of course, a freak injury on May 10, 2011, in Colorado wound up ending his season. It's not very likely that Davis would have maintained that pace over the course of a full season, but finding out what Davis could be at the plate had to wait until this year. 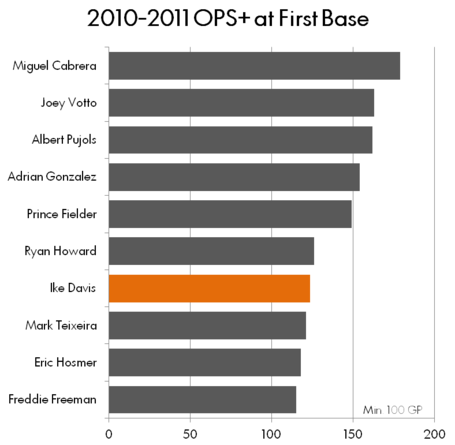 Ike is clearly one of the most exciting players on the Mets heading into the 2012 season. He's shown a great deal of promise thus far in his career, getting on base at a good clip while hitting for power and playing the field very well. His season this year figures to be something between his rookie year and his abbreviated season last year, which would be perfectly fine for a young, cost-controlled player on a team with major budget constraints for the foreseeable future. Most projections don't see it happening, but it wouldn't be a surprise to see 30 home runs out of Davis this year, something that hasn't happened for a Mets player since Carlos Delgado hit 38 and David Wright hit 33 in 2008.