R.A. Dickey's backstory is rather unique. The Mets' affable knuckleballer was first drafted in 1993 by the Tigers, didn't sign with them, and was drafted again in 1996 by the Rangers. The Rangers, however, saw something off with Dickey's arm and had him examined by doctors, who discovered that he had no ulnar collateral ligament in his right elbow. Under the impression that Dickey would break down, the team wound up signing Dickey out of the draft for much less money than they had originally offered.

From there, it took until 2001 for Dickey to make his first appearance with the Rangers. Over 262.2 innings spanning the 2001 and 2003 through 2005 seasons, Dickey had accumulated a 5.55 ERA with unspectacular strikeout and walk rates.

When he encountered a back injury in 2005, he decided he'd become a knuckleballer. He only made one appearance with the Rangers in 2006, spent 2007 pitching for the Brewers' AAA affiliate in his home town of Nashville, and resurfaced in the majors with the Mariners in 2008, where he split his pitching duties between the starting rotation and bullpen. In 2009, the Twins picked up Dickey and used him out of their bullpen for all but one start. Between his years in Seattle and Minnesota, Dickey's 4.99 ERA didn't look much better than his earlier career numbers, and he was striking out fewer and walking more hitters than he had in the past.

When the Mets signed Dickey prior to the 2010 season, no one expected him to be the team's best pitcher. At the age of 35, Dickey had to begin the year in Buffalo but garnered quite a bit of attention when he retired twenty-seven straight hitters after allowing one hit to begin a game. It wasn't long after that game that Dickey got his shot with the Mets, and it could not have gone better. In 174.1 innings of work, Dickey posted a 2.84 ERA while walking merely 2.2 batters per nine innings, a rate that ranks among the all-time best for knuckleballers.

Heading into 2011, many were skeptical that Dickey's 2010 season was at least partially a fluke, but he proved the doubters wrong. In 208.2 innings, Dickey's 3.28 ERA was still very good, and 2.3 BB/9 was nearly identical to his 2010 performance. Once again, Dickey was the Mets' best pitcher. 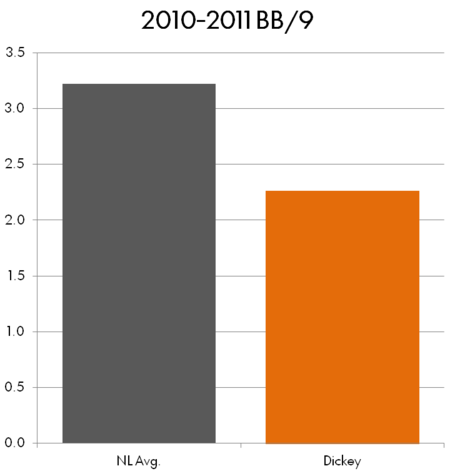 Even if Johan Santana is healthy enough to pitch a full season, it's entirely possible that Dickey will still be the best pitcher in the Mets' rotation. With two very good seasons under his belt since joining the Mets, there's little reason to doubt Dickey's ability to pitch well in 2012. On a team with many questions moving forward, Dickey's about the surest thing on the roster.