Lucas Duda wasn't typically mentioned as one of the Mets' top up-and-coming prospects after he was drafted. It’s wasn’t exactly unfair to overlook Duda, who didn’t live up to the .859 OPS he produced in his 2007 debut with the Brooklyn Cyclones over the course of the following two years. He was decent in St. Lucie in 2008 and again in Binghamton in 2009, but at the age of 24 in 2010, he began to mash even more than he did in Brooklyn. Between Binghamton and Buffalo, the Dude hit .304/.398/.569. That production got him a call up to the Mets that year, but in 92 plate appearances, he struggled at the plate outside of a few home runs.

Prior to the 2011 season, there wasn’t much certainty as to whether or not Duda would amount to much in the big leagues since he had been relatively old for the levels at which he played in 2010. He wound up making the Opening Day roster, though, thanks to the fact that Jason Bay was set to begin the year on the disabled list. Duda didn’t play very much, and in the little playing time he did get, he didn’t hit at all. By the beginning of May, he found himself back in Buffalo, but he wasted no time in getting his bat going once he got there. His .302/.414/.597 line earned him a second chance with the Mets in June when the Mets started dropping like flies.

Although Duda didn’t hit his first home run of the year until July 23, he was quite impressive with the bat upon his return to the big leagues. By the end of the year, he had posted a .292/.370/.482 slash line, good for a .368 wOBA. While Carlos Beltran was still around, Duda played first base, but he shifted to right field on an everyday basis not long after Beltran was traded to the Giants. If there’s one major flaw in Duda’s game, it’s that he looked like a liability in the field at both positions. 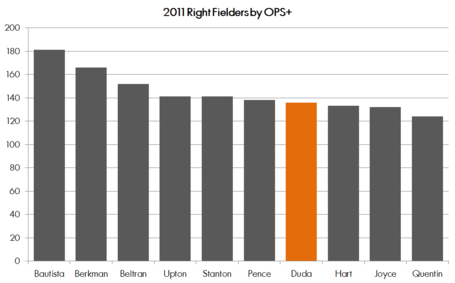 The Mets find themselves in a rather fortunate position with Duda to begin the season. Even though their trade of Beltran seemed obvious very early last year, there was no heir apparent in right field for 2012 and beyond. Whether or not Duda will be a player to build around remains to be seen, but he appears to be a capable, affordable, bat-first right fielder. If he can replicate his offensive production from 2011, he should be a great value, and if manages to improve at the plate, he could be a steal. And if all else fails, he’s probably still going to hit a few home runs of the 450-foot variety this year, and each one of those is awesome to watch in its own right.