The Baseball Assistance Team's annual dinner took place in New York last night and there were plenty of former and current players in the house. Many of Gary Carter's former teammates spoke about the catcher's battle with cancer. Meanwhile, former Mets center fielder Carlos Beltran was in attendance and he had some things to say regarding the morons fans who continue to irrationally dislike him just because he struck out to end the 2006 NLCS. Important: If you want to have some semblance of a happy day, whatever you do, do NOT click the play button on the video on that page. You've been warned.

The Mets signed 16-year old Venezuelan LHP Adrian Almeid to a contract with a bonus of $170,000. There's not much information out there about Almeid, who threw just two innings for Bravos de Margarita in the Venezuelan Baseball League this winter, but considering the sizable bonus he received and the fact that the Red Sox apparently were in on him as well, this couldn't be anything but a good signing.

Ted Berg says that Daniel Murphy is basically a representation of the 2012 Mets and I think the comparison definitely fits. I assume that this also means that the Mets Mean Business™?

Over at Rising Apple, Matt Kaufman sat down for a one-on-one with Mets pitching prospect Greg Peavey. The 2010 6th rounder split last season between Savannah and St. Lucie.

Toby Hyde has started publishing his annual Top 41 Mets prospect list, beginning with the three position players and two pitchers who have officially graduated from the list. If you'd like more prospect rankings, MLB.com will be revealing their Top 100 prospects on MLB.com and the MLB Network tonight at 10:00 PM.

Hold onto your hats, people. The Prince Fielder free agent saga is finally over and Cecil's son got a doozy of a deal. In a surprise to most, Fielder agreed to a deal with the Detroit Tigers, which will pay him a sum of $214 million over 9 years. He's a great hitter but this seems like a steep price, especially considering the fact that the Tigers already have DH types in Miguel Cabrera and Victor Martinez locked up to big money, long-term contracts. Actually, you can scratch Cabrera off that list--he's going to move back to third base, a position he hasn't played since 2008. The offense, led by Fielder and Cabrera, should be superior but it'll be interesting to see how it all works out for them defensively.

Fielder was not the only player to sign a new contract on Tuesday. Giants ace Tim Lincecum agreed to a two year, $40.5 million contract to avoid an ugly arbitration hearing and reliever Francisco Cordero agreed to a one year deal with the Blue Jays worth $4.5 million. In Toronto, Cordero will work as the setup man to Sergio Santos who was acquired from the White Sox earlier this offseason. Over at HardballTalk, Matthew Pouliot updated their list of the top 111 free agents list. Edwin Jackson and Roy Oswalt must be getting pretty antsy right about now.

Over in True Yankee™ Land, Jorge Posada officially announced his retirement at a Tuesday morning press conference. Posada had a solid 17 year career, though he falls short of the Hall of Fame in my mind.

Cuban defector Yoenis Cespedes has (finally) established residency in the Dominican Republic. Furthermore, his representative Edgar Mercedes said yesterday that he has been granted MLB free agency and is able to talk to teams about contract terms. MLB has yet to make an announcement about this, but considering that Cespedes was pulled out of the DWL, it seems like the ball should start rolling on negotiations very soon, if they aren't already.

Do you miss Tony LaRussa? No? Well regardless, you'll get to see him manage again, as it's been confirmed that he will manage the National League team in the 2012 All-Star Game. This seems like a perfect venue for LaRussa, considering how the All-Star game is known for its endless amount of pitching changes and lineup substitutions.

Want to feel really old? Ken Griffey Jr's oldest son Trey Griffey is currently a high school senior and he officially committed to the University of Arizona on Monday -- not as a baseball player like his famous father and grandfather -- but as a football player.

Finally, I saw this and thought it was pretty sweet (I know, "Hate the Phillies" notwithstanding): The Reading Phillies are hosting the AA Eastern League All-Star game this year but the plan for their home run derby the night before is truly a sight to behold. The R-Phils Home Run Derby & Autograph Party will feature a 500 person VIP Party ON THE INFIELD while the hitters are hitting, with a guitarist playing live music right next to the pitcher's mound (this area will be surrounded by nets, of course). In the outfield, there will be a number of targets (some stationary, some moving) for the hitters to aim at, three of the unsafest featuring interns who have to try to catch fly balls (one while jumping on a giant trampoline, the second while dangling from a giant crane in left center field and the third sitting in a dunk tank with an 8-foot trigger). You don't believe that this is real? Well, as far as I can tell it totally is and there's even a 5-minute video attached, in which R-Phils GM Scott Hunsicker explains all of the ridiculous things involved, to go along with this drawing of what the field will look like: 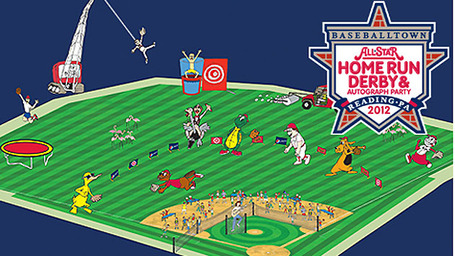 Honestly, I may have to get tickets for this just to say that I actually witnessed it in person.