It's time to continue our Project project, which began with Ruben Tejada and his walk rate and continued with David Wright and his power/contact dichotomy. Now it's time to tackle the big boy, the Ox, El Dudarino, or just Lucas Duda if you're into that brevity thing.

Using the best heat maps, batted ball maps, advanced statistics, and batting coach insights that we can muster, let's see what issues Duda might have at the plate in 2012. Along with Ike Davis, he might be the Mets best shot at a young, cost-controlled middle-of-the-order bat, so his development this year should be of great interest. On a team needing more positive on-the-field story lines, Duda provides hope.

First, let's admire what good plate discipline can do for your heat maps, which factor in all results on pitches and compare them to the league average. Walks are good, but doubles and home runs are better, just like green is good but red is better. Lucas Duda knew the zone in his rookie year: 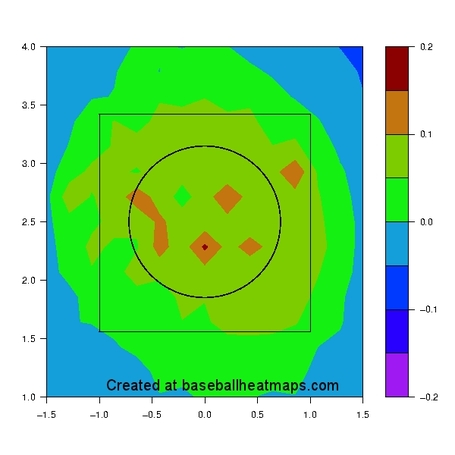 How about that. Above average everywhere in the zone with some nice power spots down the middle. Very little changed in 2011, when he once again controlled the zone: 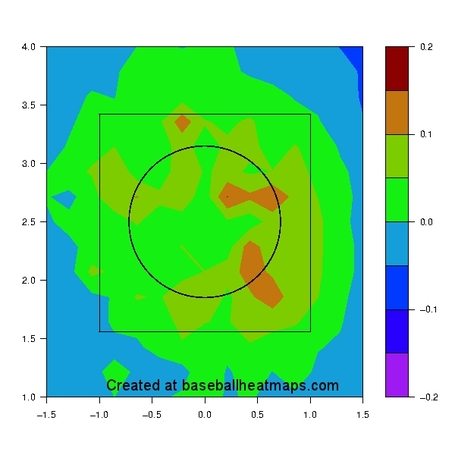 There's a bit of a change here, even if the overall picture looks similar. Since we are looking from the batter's perspective, Duda's best zones were on the inside part of the plate. Was he pulling the ball more? Dave Hudgens, the Mets batting coach, wasn't sure he remembered it the same way -- "If he tries to pull to much, he can get longer with his swing," Hudgens pointed out.

Well, it may or may not be good for his overall approach at the plate, but Duda did begin to pull the ball a little more at one point last season. The first bunch of dots represents the angles on his 2010 batted balls (fly balls, line drives, and home runs), and the second bunch is 2011. Check out his batted ball angles -- since -45 is down the left field line and +45 is down the right field line, you can see that he pulled the ball more at one point last season. 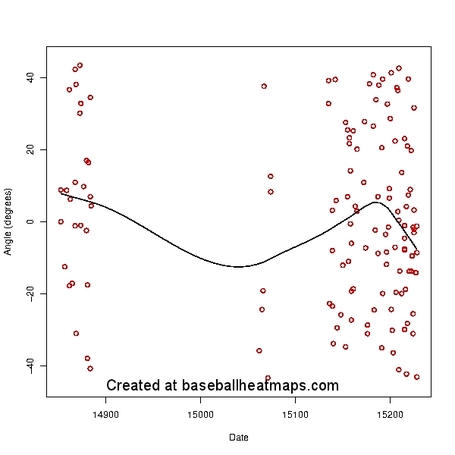 Early in the second half in 2011, Duda began pulling the ball more. It meant more power. Look at the corresponding spike in batted ball distance: 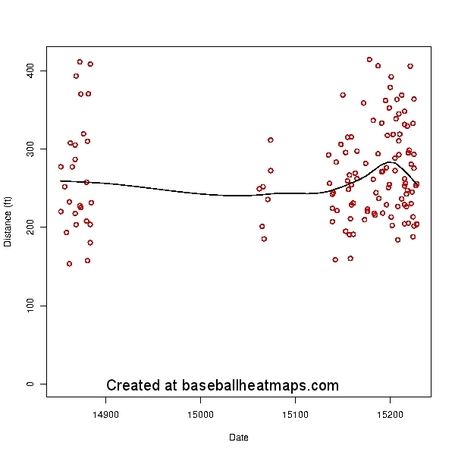 If it was anything, Hudgens felt he might have been a little tired. "It was his first full year," Hudgens pointed out, and a little fatigue could be expected.

But Duda is not your typical pull power hitter. He hit only 11 home runs in three years at USC, he didn't put up a slugging percentage over .500 until his second try at Double-A, and so far his 10.2% home-run-per-fly-ball rate is just about exactly average for the majors. He has great plate discipline -- above-average in both strikeout and walk rate as well as their corresponding peripherals -- but maybe he shouldn't be trying to pull the ball out of the park, especially if it will lead to more strikeouts.

Hudgens doesn't want Duda to worry to much about the power. He pointed out that plenty of good batters hit their power stride late -- like Jason Giambi, for one -- and that line drives (Duda's 21.8% line drive rate so far is well above the 19% average) were the sign of a good hitter. "It's better to be a good hitter first, and then develop the power, because then you know how to make adjustments," he emphasized.

What does Hudgens want Duda to focus on? Pre-pitch movement. If he can "quiet it down" and get the front foot down before he gets started, Hudgens felt, he would be even more consistent. Combining his sense of rhythm with calmer, more controlled pre-pitch movement might be the last step.

"He's already a player with great work ethic and a strong sense of preparation and routine," Hudgens pointed out. The hitting coach is confident the young player can continue to calm his pre-pitch routine while finding the optimal mix of pull power and plate coverage.

That confidence must be spreading: the "overs" on most of Duda's projections look tantalizingly attainable.