One of the four players acquired by the Mets on December 6, Frank Francisco was originally signed as an amateur free agent way back in 1996 by the Red Sox. Boston traded him to the White Sox in 2002 as part of a deal for Bob Howry, and a year later, he was one of the players-to-be-named-later who went to the Rangers in exchange for Carl Everett. His rookie year in 2004 went pretty well with Texas, as he struck out plenty of opponents and posted a 3.33 ERA. On the downside, he walked 27.8% of the batters he faced, and late in the season, he threw a chair from the field into the stands during a game. Francisco missed the entire 2005 season and a big chunk of the 2006 seasons after undergoing Tommy John surgery, but he was part of the Rangers’ bullpen for all of 2007 through 2010, struggling in his first full year back but pitching very well after that. Between the 2010 and 2011 seasons, Francisco was flipped to the Blue Jays for Mike Napoli, whose perennial under-appreciation has probably come to an end after his outstanding season last year with the Rangers.

In Toronto, Francisco pitched much like he did over his last three seasons with the Rangers. He struck out quite a few opponents, didn’t walk too many, and his 3.55 ERA was more or less supported by his 3.80 FIP and 3.36 xFIP. He’s still throwing a mid-nineties fastball on average, but it’s worth noting that Francisco’s strikeouts have gone down a bit over each of the past few seasons. 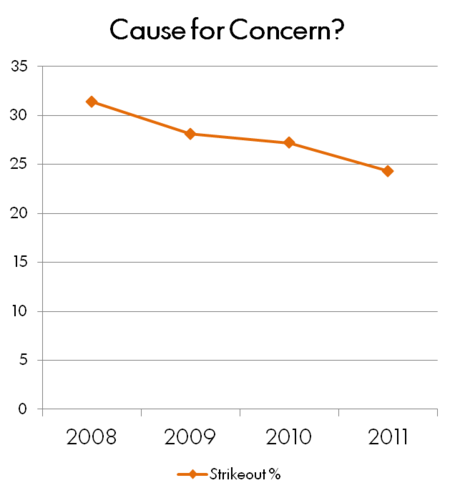 Francisco was, of course, signed for two years by the Mets to be the team’s closer, a role which he filled briefly in both Toronto and Texas. The fact that he doesn’t have a long track record of saves doesn’t bother me in the least, and there’s not much reason to believe he’ll struggle in the role over the next couple of seasons. It’s worth noting that Francisco held a 126 ERA+ over the past four years thanks in large part to the hitter-friendly environments in which he pitched. As a 32-year-old relief pitcher, he also figures to be a potential trade chip either this season or next since the Mets picked him up for a reasonable $6 million per year.