From the time he was drafted by the Mets in 2007 until his cup of coffee with the team at the end of the 2010 season, there wasn’t a ton of buzz surrounding Dillon Gee. Between 2007 and 2008, Gee pitched for Brooklyn, St. Lucie, and Binghamton, demonstrating an excellent ability to avoid walks at all three stops. Upon his promotion to Buffalo in 2009, however, Gee’s walks per nine jumped from 1.4 to 3.0, and his 4.10 ERA was considerably higher than it was in the lower levels of the system.

In 2010, he cut down on the walks and increased his strikeouts to a career high, but there still wasn’t a ton of excitement when he got his cup of coffee at the end of the season, partially because he’d put together a 4.96 ERA in Buffalo and partially because he wasn’t a pitcher with electric stuff – Gee’s average fastball doesn’t crack 90 mph. In five starts with the Mets near the end of the season, Gee generated some excitement with a 2.18 ERA, but his peripherals suggested that such production was entirely unsustainable. His 4.20 FIP in those outings was a much better indication of what might be expected from Gee in 2011.

Gee began the 2011 season in Buffalo, but he joined the Mets’ rotation in the middle of April thanks to Chris Young’s season-ending injury. Through his first 13 appearances, 11 of which were starts, Gee pitched to the tune of a 2.86 ERA, but it still looked like he was in line for a return to planet earth. Sure enough, Gee struggled over the remainder of the season. By the end of the year, he wound up with a 4.43 ERA. On the bright side, Gee’s ability to pitch in the big leagues at the beginning of last season was no sure thing, and although he didn’t set the world on fire, he showed that he’s able to play at baseball’s highest level. 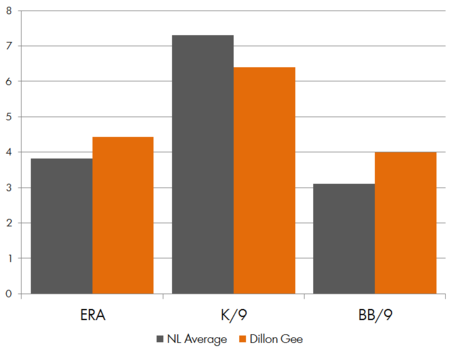 Even with a healthy Johan Santana this year, Gee’s penciled in as a member of the Mets’ very thin starting rotation. Given his track record thus far with the Bisons and Mets, the smart money is on a 2012 season that looks a lot like his 2011 season. In a perfect world, Gee would begin the season in Buffalo and provide depth for the rotation, but the Mets just don’t have very much starting pitching right now. As a result, Gee should get another full season opportunity to prove his doubters wrong by showing some improvement.