By the time Scott Hairston had joined the Mets for the 2011 season, he was playing for his fourth major league team. Drafted by the Arizona Diamondbacks in 2001, Hairston mashed at the lower levels of the team’s farm system, albeit at a slightly advanced age, before making it to the majors in 2004. The majority of his playing time over the two subsequent seasons came while playing in the hitter-friendly Pacific Coast League, where Hairston posted an OPS just shy of 1.000 in both 2005 and 2006. He earned another shot with the Diamondbacks in 2007, but he wasn’t all that impressive at the dish through 76 games. Arizona traded him to the San Diego Padres just before the trade deadline that year, where he put up great numbers for the remainder of the season.

In 2008, Hairston struggled to get on base but most definitely hit for power, belting 17 home runs in only 362 plate appearances. Through the first half of 2009, he was getting on base at a much better clip while improving upon his power numbers, and the Padres traded him to the Oakland A’s in July. In his brief time with Oakland, Hairston was pretty awful with the bat, and after the 2009 season, the A’s traded him back to the Padres. His 2010 season was mediocre at the plate at best, but the one thing Hairston maintained was his ability to hit home runs. When he finally hit free agency at the end of the year, the Mets signed him to be a fourth-outfielder type for the 2011 season.

Although Hairston had always been a part-time player in the big leagues, the Mets only used him for 145 plate appearances last year. Despite the limited playing time, Hairston managed to hit 7 home runs – one home run approximately every 21 plate appearances. One quirky thing about the season was the Hairston raked against right-handed pitching and didn’t do so well against left-handed pitchers, the opposite of his career splits, but that can be chalked up to the tiny amount of data on the year. On top of producing with the bat, Hairston appeared in all three outfield positions, and he looked like a capable if unspectacular defender at all of them. 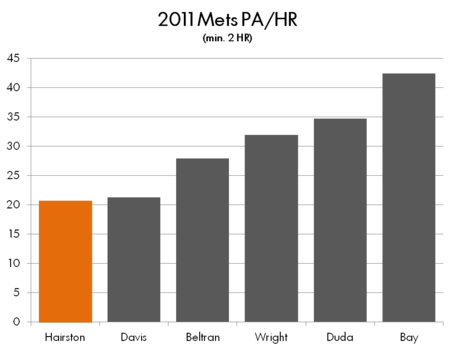 Hairston once again hit the free-agent market at the end of the year, but he eventually signed another one-year, $1 million deal with the Mets, a perfectly reasonable deal for both sides. While Hairston’s clearly not a full-time player, his power off the bench and ability to spell any of the starting outfielders should be of value to the Mets this year. It wouldn’t be surprising to see Hairston starting in right field in place of Lucas Duda against some of the tougher lefties the league has to offer, and when he’s on the bench, he should be Terry Collins’ first option when it comes to right-handed pinch hitting. And like many of the Mets' other role players, Hairston could prove to be a trade chip in July if a contending team is in need of some right-handed power on its bench.