Share All sharing options for: Let's Go to the Videotape: 1986 Mets, A Year to Remember 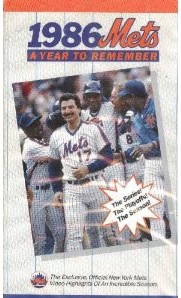 For a good chunk of my youth, my family did not have a VCR. We didn't have a lot of things, truth be told, but Kid Me felt the absence of a VCR more than any other material good.

My grandparents, who lived next door, did have a VCR, which I set about exploiting as often as possible. Primarily, I asked them to tape cartoon specials (Charlie Brown, Garfield, and the like) so I could keep them for posterity. But one year, my brothers and I bought a video "for" my grandfather for his birthday, largely so we could watch this video whenever we went to his house.

This video was 1986 Mets: A Year to Remember, an hour-long retrospective of the World Series champs released not long after they won the trophy. This was in the days when buying a movie on VHS (as opposed to renting it) was still a bit pricey; the video cost $30, if I remember correctly. It came in a chunky black plastic clamshell case, with an insert that depicted several key Mets (Carter, Straw, Doc, Mookie) led by a hatless Keith Hernandez. It was an oddly low-key picture to put on the cover of something that contained so much insanity.

It wasn't a completely selfish gift; my grandfather was a Mets fan, and the enthusiasm he displayed when we gave it to him wasn't feigned. However, I'm sure we watched this thing far more times than he ever did, because I don't think anyone has ever watched anything as much as we watched this video. When we eventually acquired our own VCR, we asked to borrow the video. My grandfather, being a saint, said yes. It stayed with us forever after.

I am positive that we watched this video at least once a day for two years. This is not hyperbole at all and I will swear on the holy book of your choice to this truth. I could probably recite the entire thing word for word, and I don't think it would be too difficult to do, either. If you spotted me the first line, I could run with the rest.

A Year to Remember contains none of the salacious tales of The Bad Guys Won, or even the SNY-produced 1986 retrospective. When it was made, the personal issues of Doc Gooden, Darryl Strawberry et al had yet to be exposed. So there is nothing in this video but triumph, chest thumping, and clip after clip of unmitigated awesomeness. We all know how crazy the 1986 postseason was, but what we don't quite remember is that, considering they won 108 games, the Mets managed to play a lot of regular season games that were straight-up bonkers.

Considering when it was made, the production values are above reproach. The cheesiness we associate with 1980s sports videos are not evident here. The words "musical montage" might make you cringe, but the ones put together for this video are amazingly well done. I'm particularly fond of a clinic on hotfoot application given by Roger McDowell and Howard Johnson, intercut with other wacky team footage from the 1986 season, to the tune of Emerson Lake and Palmer's "Karn Evil #9." A close second is a Tribute to Grission that prominently features Wally Backman and Lenny Dysktra sliding headfirst over and over, above Duran Duran's "Wild Boys."

This has never been shown on SNY, to the best of my knowledge, presumably because the music cited above would be too expensive to license. There is also footage from the Mets appearing on MTV, and the "Let's Go Mets Go!" video both of which are also troublesome, I assume. So I was going to digitize my own copy and hope the mailed fist of MLBAM wouldn't find me.

But it turns out, someone already went through the trouble of doing so. Thanks to this intrepid YouTube member, we can all enjoy the entire video, in a transfer that is of pretty good quality. Kudos, sir or madam. Truly, you are doing the Lord's work by making this available to the world at large.