This Week In Mets Quotes: R.A. Dickey On The Cy Young, David Wright On Motivation

Lots of interesting, funny, idiotic, and insightful things were said by the Mets — and about them — over the past week. Here are some of our favorites.

Share All sharing options for: This Week In Mets Quotes: R.A. Dickey On The Cy Young, David Wright On Motivation

Personally, I lay my head on my pillow every night feeling way less sure of my personal effort on a given day

“Look, the [Cy Young] award obviously would be nice. It would be silly to say that it wouldn’t be fantastic. At the same time, you’ve got to be able to lay your head on your pillow -- whether you’ve won it or not -- and know that you’ve done your best. And I can do that. A 20-win season is also very difficult to get, and thankfully we’ve been able to do that. So, at the very least, to say you were a 20-game winner for the New York Mets, that’s pretty significant for me.” —R.A. Dickey [ESPN]

Literally, there was zero expectations, the fact that we didn’t have to file for Chapter 11 is a victory in itself

"We certainly are disappointed in the record. We're not going to make any ifs, ands or buts. We're not putting any blame on anything or anybody. We got off to a good start. We changed the atmosphere in here. We didn't continue it, but we will. This was certainly step one. We came into spring with absolutely zero expectations.” —Terry Collins [ESPN]

Except this is New York, so forget what I said there were huge expectations

That was not acceptable here. That was not going to happen. You need to be accountable here. There is expectations here. This is the New York Mets. You know what? They got ready in spring training. Yeah, we had some things that happen that we can't control. We also had some things that we could control that didn't go our way.” —Terry Collins [ESPN]

“When you spend seven months with 40 guys in the same small space, you get to be close to a lot of them. I just thanked them for all the effort and the fact they played so hard here together. A great clubhouse.” —Terry Collins [ESPN] 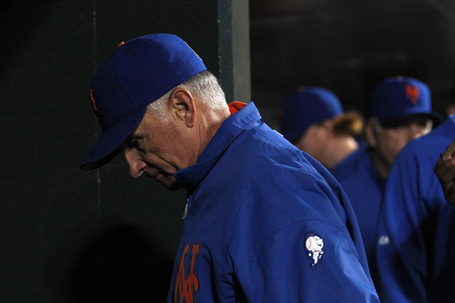 Stay the course, and you know, also add an influx of talent and shake things up but don’t forget to have patience

"There were some bright, bright spots here. And these guys are responsible for that. You look at the young players that are here. You can grow with that. You can grow with the pitching staff that's coming. You've got to like what you're looking at. With the resurgence of Ike [Davis], I think next year Lucas Duda is going to be an impact player, [Daniel] Murph[y] is an everyday guy. There's a lot of positives you can take out of this. We've got to get it done, but as we've seen, if we stay the course and don't panic and have some patience, this is going to come together." —Terry Collins [ESPN]

I believe 07 and 08 left a bad taste that was supposed to motivate them, but this is probably the taste we need

"We got a little taste of what it's like to win in the first half. Hopefully that kind of motivates guys and guys understand with hard work -- you put in the time and the effort -- that obviously [even] with low expectations you can come in and win a lot of baseball games, like we did in the first half." —David Wright [ESPN]

Again, but we will need an influx of talent

"I'm not prepared to blow up the team and start over again. I don't think we need to do that." —Sandy Alderson [ESPN]

To be fair, besides the Dodgers, no one does anymore

"My message said: Look, I think we're very definitely headed in the right direction. But, at the same time, we will not in the near future have unlimited funds." —Sandy Alderson [ESPN] 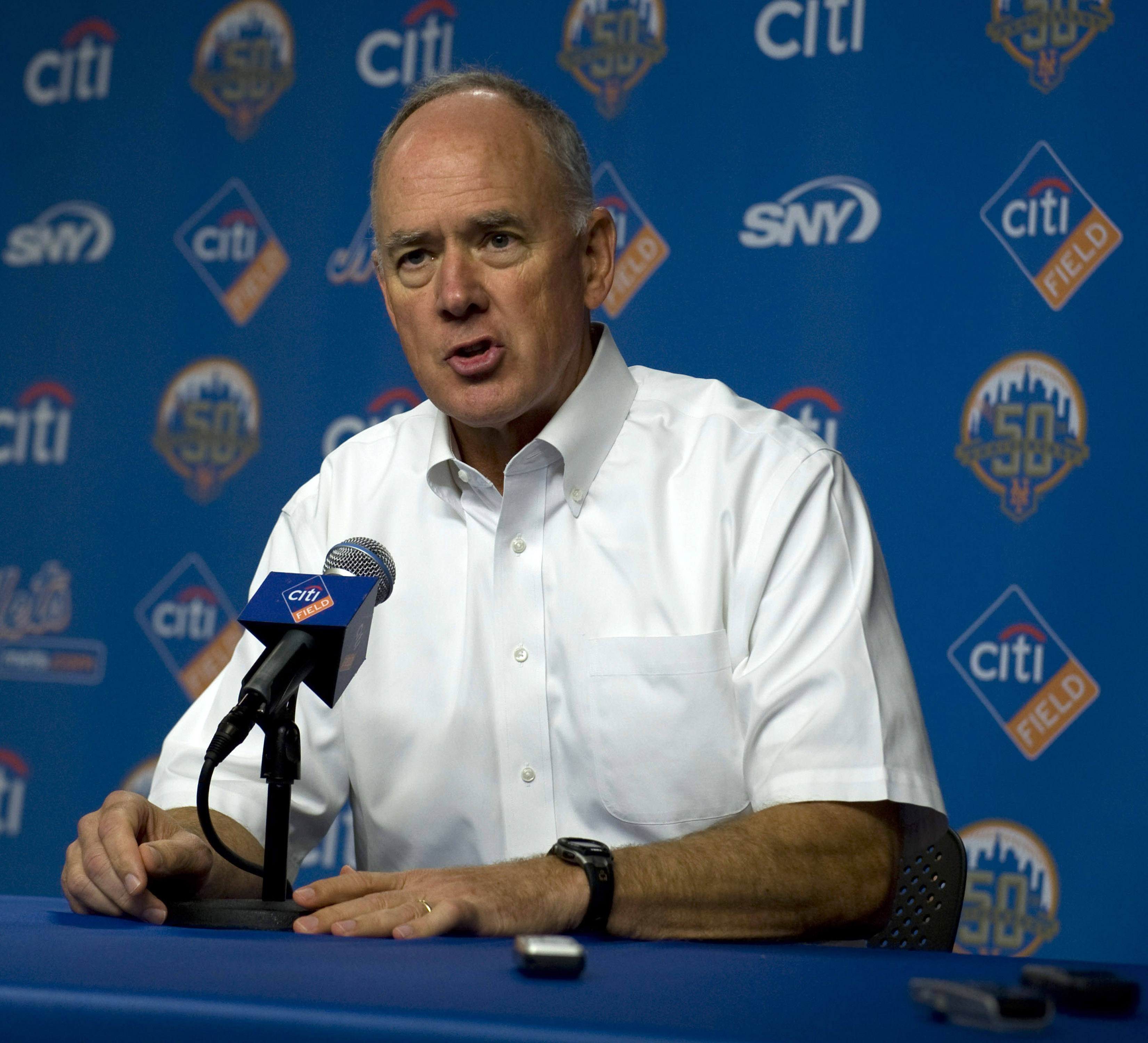 I’m looking at you Jason Bay

"I don't want to give the impression that we're going to be out in the free-agent market looking for significant additions. We have lots of payroll tied up in a handful of players. That's a situation that gradually has to resolve itself." —Sandy Alderson [ESPN]

Unlike for Jose Reyes

"What we've said over the last couple of months is we're going to make every effort to retain those two guys. I think we are in a position to be able to do that. Whether we are successful or not, time will tell. But we're in a position to make a bona fide effort to do it.” —Sandy Alderson [ESPN]

“I wanted him to have his moment. For sure, I tried to give him as much time as I felt like I could before I got on the rubber. I think the story far transcends the result of the at-bat. Just like I said before, that was important -- for him and me, I think -- for me to treat him like a big leaguer.” —R.A. Dickey [New York Times]

“[David Wright] has been the face of the franchise for a long time." —Jose Reyes [NY Post]

“When I left the Mets, I knew I was going to a better situation. The team we put together on the field was a very good team to compete in our division, but it didn’t happen that way. Nobody thought we were going to be behind the New York Mets at this point. ... I’m happy where I’m at. They treat me good here. We still have a lot of good pieces here. We just need to put it together on a consistent basis. This year we had only one good month, May. We need to put that on a consistent basis, we want to compete.” —Jose Reyes [NY Post]

“The old adage is: See it low, let it go. See it high, let it fly. We’ve kind of capitalized on that thought process in keeping that knuckleball at a higher part of the zone a lot more often and getting a lot of strikeouts from it.” —Dan Warthen [NorthJersey.com]

Really would like more of this kind of reporting, such as Ted Berg’s discussion with Ike regarding curveballs earlier in the year

“It wasn’t really an idea as much as we kind of stumbled upon it in Pittsburgh (May 22.) I figured out a mechanism to be able to keep it elevated and still take spin off of it. At least I thought I had, and was anxious to work on it in my bullpens subsequent to that outing.” R.A. Dickey [NorthJersey.com]

“Sure enough, it seemed like we had identified something that I could do to change the elevation consistently when I wanted to. The thing about a knuckleball is a lot of times you’ll try things and it’ll do the opposite. It’s just the nature of that pitch from time to time. So when you find a way to do something and you can consistently do it with that, then you’ve found something good. From that moment on I really worked hard on it.” —R.A. Dickey [NorthJersey.com] 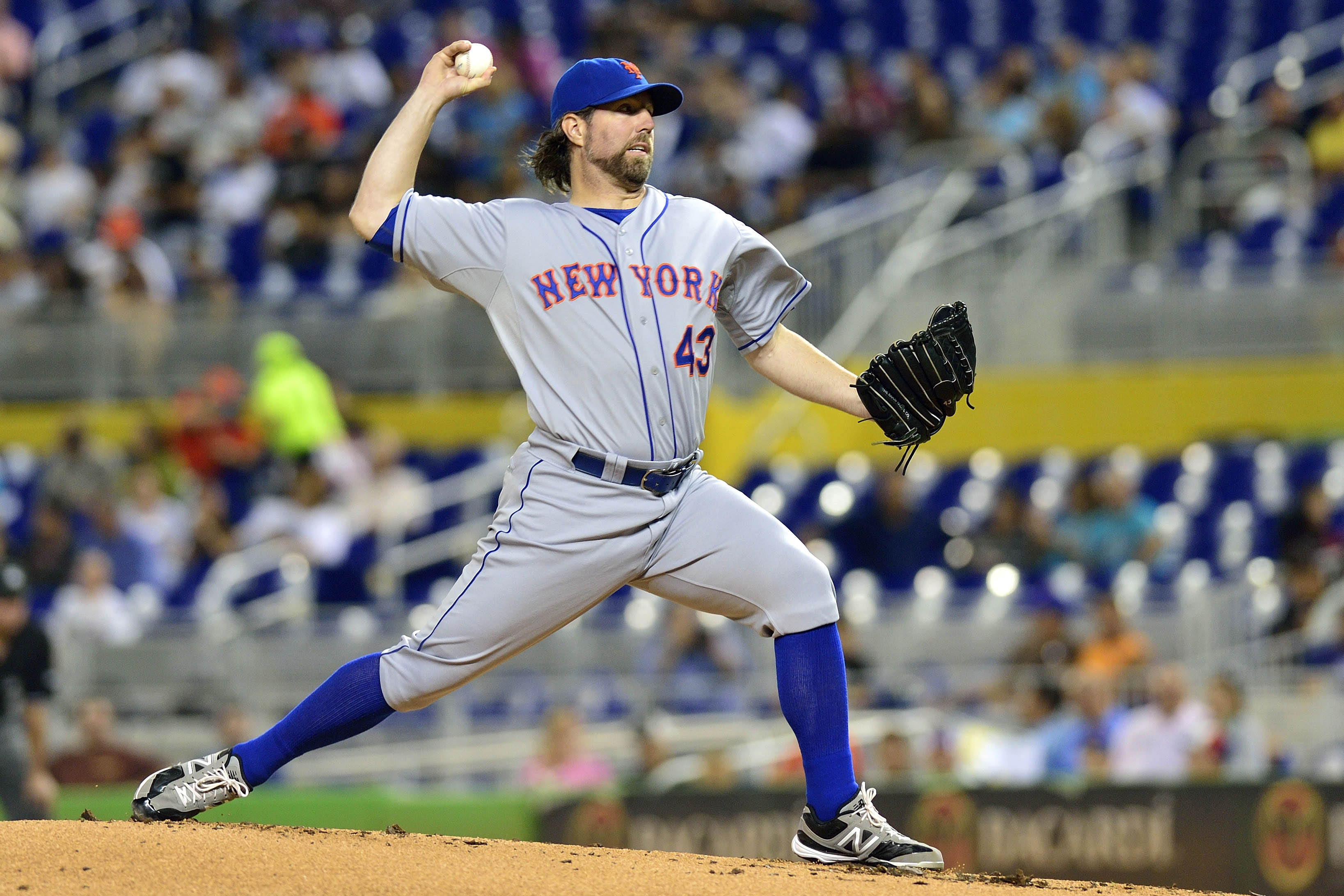 "Wally [Backman] said it on the bench -- that's been [Familia's] problem, the base on balls. But you saw, when he's over the plate, they don't hit him. I know Dan [Warthen] was talking to him between innings. He said to him twice: 'Make them swing the bat. Make them hit the ball. Go out there with the idea you're going to make them hit the ball,' because his stuff is quality and they're not going to get a lot of barrel on it." —Dan Warthen [ESPN]

He’s ready for the big leagues

"I have to keep working on my fastball command." —Jeurys Familia [ESPN]