Carlos Beltran and the Parallel Universe of the Playoffs

Share All sharing options for: Carlos Beltran and the Parallel Universe of the Playoffs

I was at Shea Stadium for game 7 of the 2006 NLCS. Sitting in the upper deck above left field, I had a bird's eye view of Endy Chavez's amazing catch. When it happened, the stands shook as every fan jumped up and down in unison. Having witnessed the most amazing play they'd ever seen, and may ever see, the crowd's collective brain was so overloaded, it had no idea what to do but break into a string of nonsensical profanity. They were only words we could handle. And in the jubilant aftermath, though no one dared say it, everyone thought the exact same thing: There is no way on earth the Mets lose this game now.

In the months to come, I would lie awake at night, still believing there was no way the Mets could have lost that game, even though I'd seen first hand that they could. I'd visualize Carlos Beltran not looking at strike three, but whipping a bases-clearing double to right-center, and the Mets celebrating a walkoff win, and the stands erupting once more. I'd see this so clearly in my mind, I wondered if it hadn't actually happened in some alternate universe. I was just stuck in the wrong one.

Back here, in the wrong universe, the Mets lost game 7 and went on to miss out on the playoffs by one game in successive seasons, then plummet into mediocrity. Because of the events that followed, this is also the universe where Beltran's Mets career is largely considered a bust, particularly when we recall his one playoff appearance for New York. This feeling has burst anew, well over a year since Beltran left Queens, because of some breakout games Beltran has enjoyed Cardinals in the first round of the playoffs this year. Seeing him tear it up for St. Louis in October, most fans--and the media folks that serve them--share sentiments such as this: 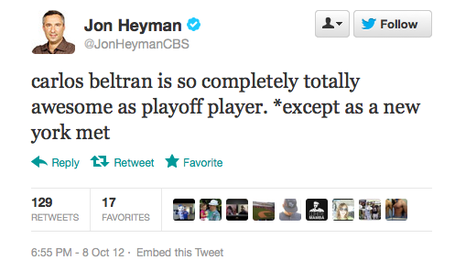 Carlos Beltran became a free agent immediately after he put on a playoff performance for the ages with the Astros in 2004. This was seen as very fortunate for his pocketbook, but it placed a lot of expectations on his head. Once the Mets signed him to a huge seven-year deal, the implication was, This man will not only lead the way to the playoffs, but dominate once there. It would not be good enough for him to be amazing in the regular season, which he often was, and particularly so in 2006. He would also have to be shade-your-eyes brilliant in the playoffs. By this measure, we place Beltran on the scales and find him wanting.

This opinion of Beltran's lone Mets October results in the frustration voiced by Jon Heyman's tweet. The fact that 129 people RTed it shows he is far from alone in his feelings. Beltran became a symbol of the overall failure of the 2006 Mets, a team that appeared to have so much promise. Called out on a third strike to end the series. Watching an opportunity slip by.

When you become a symbol, certain things no longer matter, like data and facts. Statistically, Beltran's 2006 postseason looks like this:

These stats are far better than most people think. It would probably surprise most people to find out that only Carlos Delgado had a better showing at the plate for the Mets that postseason.

The classic knock against a good player we turn on for some reason is that he does all his "damage" in low leverage situations. But in Beltran's case, even beyond the raw numbers, his 2006 postseason had some important game-changing moments. In game three of the NLDS at Dodger Stadium, he capped a three-run rally with an RBI single that put the Mets up by two runs and took the crowd completely out of the game. In the first game of the NLCS, he accounted for all the Mets' scoring with a two-run homer as the home team went on to win, 2-0. In game four, which was essentially a must-win game, he belted two longballs amid a 12-5 drubbing that tied the series at two games apiece. Even in the infamous game seven, Beltran hit a two-out double in the first inning, then came around to score what would prove to be the only Mets run of the contest. 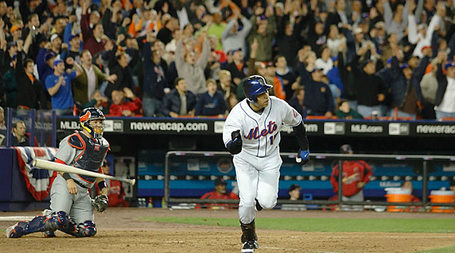 We all know what Beltran did at the end of that game (or failed to do), but if you look at all the games the Mets lost in the NLCS, searching for other instances of Beltran coming up short, they are few and far between. Beltran's closest brush with game-altering failure that year came in game two, when he hit into a double play to end an inning and a potential rally. The Mets eventually went down to defeat, 9-6, a result that tilted the series in the Cardinals' favor.

If you want, you can blame Beltran for that outcome. But his failure to come through in that game pales in comparison to the failure of Billy Wagner, who allowed a leadoff home run to So Taguchi in the top of the ninth and eventually coughed up three runs in that frame. It also is a far cry from the failure of Guillermo Mota before him, who backed Scott Spiezio in an 0-2 hole and still managed to give up a game-tying bases-clearing triple.

With so much blame to go around, why is so much of it still directed at Beltran? There are many reasons, the biggest one being that he struck out looking to end a series, a passive act interpreted as a sign of weakness or apathy. Had he flew out or grounded out or even struck out swinging, we might see him differently now. But underpinning the desire to blame Beltran is one larger fact: Beltran is blamed because we must blame someone.

The 2006 Mets were awesome. They were a joy to watch, both statistically great at baseball and possessed of those quirky intangibles we like to put under the heading of "magic." Simply put, 2006 felt like Their Year. At the very least, the Mets should have played in the World Series. They certainly shouldn't have lost the NLCS to a team that won only 83 regular season games and sputtered into the playoffs leaking oil. They shouldn't have been shut down twice by Jeff Suppan, stifled by Jeff Weaver, baffled by a bullpen of rookies, and been tortured at the plate by the likes of Ronnie Belliard, David Eckstein, and So Taguchi.

But they were. So we search for a reason why.

In truth, the reasons are myriad. The Mets lost two-fifths of their starting rotation on the eve of the playoffs, which was itself the end result of relying so heavily on two aging, injury-prone pitchers (Pedro Martinez, Orlando Hernandez). A freak cab accident robbed them of their best reliever, and a trade to shore up their suddenly depleted bullpen meant Shawn Green patrolled right field in the playoffs instead of Xavier Nady. Billy Wagner struggled, blowing one game and nearly losing two others. This led the Mets to turn to Aaron Heilman in game seven, asking him to take on more batters than he really should have, which led inevitably to Yadier Molina.

And sometimes, there is just luck. In a 162-game regular season, luck evens out. In the playoffs--the very definition of a small sample size--strange things happen without the corrective of time to smooth them over. Things like three-run rallies with two outs in the bottom of the tenth and backup catchers hitting series-clinching home runs and shoe polish awarding you first base. Luck has worked for the Mets in October, and it has worked against them. Luck can be a jerk like that.

Albert Einstein once raged at the chaos he saw in the conclusions of quantum physics, theories that said you could never truly determine where a particle was, that it could actually be in two places at once until you observed it, and other conclusions that defied traditional physics. He exclaimed, "God does not play dice." He was offended by the idea that the subatomic world didn't obey the rules we'd determined for the world we can see, and was convinced that the fault lay not with his own perspective, but in the methodologies of quantum theorists. Eventually science would figure out that particles obeyed these rules, Einstein assumed, because, well, they just had to, right?

If one of the most brilliant minds that ever lived couldn't deal with small sample sizes, I can't expect the rest of us to do it. We too look at an outcome we don't understand (Mets lose) and pin the blame for it not on a million conspiring factors or an unfair turn of fortune, but on one performer we've presumed to be faulty. We're searching for meaning and reason in a structure built to reject such things. We blame Beltran because the frightening alternative is to concede that sometimes our fate is tied up in chaos and randomness.

If you want sense, close your eyes and imagine Beltran swinging away, winning it all. It's not fair to blame him for living in the wrong universe, along with the rest of us.