The Final Word on Andres Torres and Angel Pagan

Forget the in-season analysis, the final numbers are in...and they aren't pretty.

Share All sharing options for: The Final Word on Andres Torres and Angel Pagan

Throughout the year a couple of us here at AA attempted to evaluate the Andres Torres/ Ramon Ramirez-for-Angel Pagan swap. Needless to say, it was a premature exercise to perform midstream in 2012 and the results bore that out. So allow me to beat a dead horse sum it up for you.

The first piece -- 'Why is Andres Torres Still Playing?' -- was published by yours truly, back on July 2nd. As the title suggests, to that point Torres was not performing; he was the penultimate qualified batter in all of baseball at .209, while ranking sixth from last in OPS. Coming off a string of poor play in center field, his defense certainly wasn't helping his case either.

Meanwhile, Angel Pagan was riding high as one of the league's leading hitters following a May that saw him triple-slash .375/.422/.462. At that point there was not much debate.

However, to the original point timing is key. And to compare the red-hot Pagan with Torres on July 2nd -- directly on the heels of a brutal 47-game stretch where Torres went .165/.282/.228 -- isn't necessarily fair, or accurate.

For that reason, Eric gave us an update in mid-August -- 'Andres Torres Might Be Pretty Good' -- where suddenly the tides turned a bit. Coming out of the break Torres batted .329/.421/.488 in the 28 games until Eric's amendment to the discussion. What's more, his team-best walk rate pushed into the teens and helped buoy his value, even when he wasn't hitting.

Adding to the narrative, Angel Pagan suffered through a mid-season malaise that saw his average drop from a season-high of .321 down to .272. Despite a lot less playing time, on August 14th Torres was quickly approaching Pagan's general level of value:

Suddenly there was some hope that Sandy wasn't swindled after all. Then the rest of the season happened.

Both players went on to prove that these mid-season blips were more exception than rule. Torres would regress back down to his pre-ASB levels -- featuring a pair of 0-for-20+ stretches. The walk rate helped but a waning average against lefties and further inconsistent play in center ultimately torpedoed his season. Whereas Pagan got back on track, batting .306 for the duration of the season and pushing his WAR well beyond anything Torres could achieve.

In fact, it's sort of interesting when you compare the two players in this way. The more you look at it, the more it begins to resemble a yin and yang, two guys that always seemed to balance each other out. Just look at their OPS throughout the season (click image to embiggen): 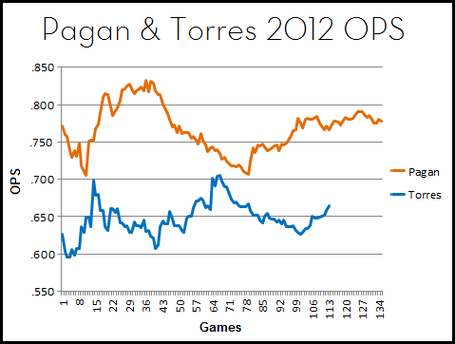 They didn't quite line up to the day, however it's pretty remarkable how closely the central peaks and troughs that defined both seasons lined up. Unfortunately for Mets fans we were mostly watching the troughs.

To that end, despite the fact that Torres missed some time it's pretty clear that Brian Sabean and the Giants got the better end of the deal. Just look at an updated version of the above WAR chart:

Torres went back to toiling away as a 30-something league average, at best, center fielder -- if we're being honest, exactly what he's been for the bulk of his career. While Pagan went back to performing like one of the better center fielders in baseball.

And that's no hyperbole. Since 2009, only eight regular center fielders have notched a four-plus WAR season more than once:

Some pretty lofty company. If you up the bar to a 4.8-plus WAR, the list only gets more impressive:

By this point I think we all understand Sandy's reasoning for making the trade. It was highly defensible1 so I won't try to criticize him there. However, It's become clearer and clearer that for whatever reason Angel Pagan remains one of the most underrated players in baseball.

Though there's little debate now that the trade was a misstep by the Alderson regime, they can still attempt to use that fact to their advantage. With Torres likely to be non-tendered, the Mets outfield situation in flux, and Pagan about to hit the open market, there's a clear eraser here. Should the league continue to undervalue Pagan (with premier names like Upton and Bourn available), a second tour in Queens might be just the fix Sandy needs to forget this mistake.

1 It should be pointed out that Ramon Ramirez performed at or near replacement level for the bulk of the season, as his ERA hovered around four throughout the year. So despite arguably representing Sandy's main return in said trade, he never really played into this discussion at any point.