Since Pick 6 is over for the winter already, we had to come up with a new way for me to bug you on a mostly-daily basis, and what we've come up with is something I'm tentatively titling "Today in Mets eBay Superlatives." Basically, anything that I find on eBay that's at least tangentially Mets-related, that's either The Best or hilariously awful, will be eligible for the series.

Today in the first post, I want to stay in the realm of "funny, but not completely absurd," just because I think we should start out easy before we fully descend into chaos. So I bring you this, the finest of all the autographed cardsthat I have so far found. 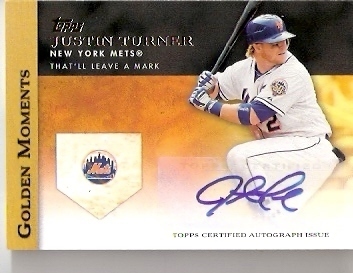 There's not a lot of information about this card on the sale page. Golden Moments appears to be a series, but exactly what the Golden Moment involving Justin Turner could be remains a mystery. Based on the fact that the card says "THAT'LL LEAVE A MARK" and my knowledge of Turner's career, I have to assume that it involves him being hit by a pitch. But there are some other options, as well.

So if you're looking to drop $5 on a trading card, this is probably the best you're going to manage.