Share All sharing options for: Today in Mets eBay Superlatives: D-MONEY, Y'ALL

At the risk of this becoming a less-awesome version of Sports Cards for Insane People (because honestly, I can't compete with Jon Bois, no matter how hard I try), today's Mets eBay Superlative is also a trading card. I'm not really sure why companies like Topps keep churning out ridiculous stuff like this — is there really a large market for collectors of awful trading cards? — but they do, and this one is a real doozy. 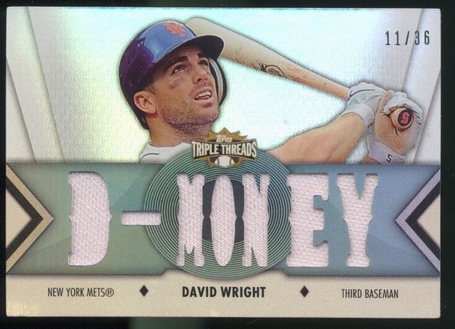 To paraphrase Michael Bluth, "don't call him that."

I'm not a big fan of nicknames of this genre as it is; I feel like the fad should have died after Alex Rodriguez was christened "A-Rod," and we certainly shouldn't have had to deal with I-Rod or K-Rod or A-Rod (that one's Aaron Rodgers, which makes it oh so much worse). This one would be bad enough if anyone ever actually called David Wright "D-Money" but I'm fairly certain that I've never heard it before, and hope to never hear it again. It's the worst.