Is Jordany Valdespin An Everyday Player?

The 24-year-old Jordany Valdespin opened eyes during his rookie campaign in 2012, but do his weaknesses outweigh his strengths?

Share All sharing options for: Is Jordany Valdespin An Everyday Player?

It's not breaking news that Jordany Valdespin is an enigma. He has been for quite some time now.

He made scouts drool throughout his minor league career with top-shelf athleticism and a strength/speed combination rarely seen in a middle infielder. Yet he got a strangely late start to his professional career — age 19 — for someone with his profile. While he consistently hit at every level as he climbed the ladder, he also consistently made himself hard to love with maturity issues that continued to pop up.

He's always featured well below average plate discipline, but he developed a very legitimate power game. He's extremely fast, yet never really proved capable of playing short. He can look as lost on one swing as a player possibly can before ripping a ball 400 feet on his next. Needless to say, there's a lot of back and forth when we talk about Valdespin.

Despite all of that, he's arrived. The 24-year-old had a decent rookie campaign for the Mets in 2012. What's more, Valdespin looks like he'll be a part of this team for years to come, should he survive the seemingly inevitable roster churn this offseason. So the question that remains is: In what capacity can he best help the Mets going forward?

I ask that question because it seems like the consensus among Mets commentators has already been set on Valdespin. Take Matt Cerrone's recent comments over at Metsblog:

"I believe (Valdespin)’s best used playing a variety of positions, against select match ups, and certainly as a pinch hitter late in games, all while getting around 200 at bats on the season."

Now I'm not necessarily trying to pick on Matt here, but he's just very representative of the overarching feelings surrounding Valdespin this offseason. And in my estimation we're jumping to those feelings a little bit prematurely, based on a number of somewhat inaccurate preconceptions.

The first preconception is probably the most prevalent; once again, we'll clip from Matt's piece:

"...while (Valdespin) can rip a fastball, he struggles with off speed stuff, which is why he was so successful late in games off the bench (with runners on base). Of course, this is also why he failed when starting and batting lower in the order, especially when surrounded by such below-average talent."

We can actually unpack this statement into two pieces.

Preconception no. 1: Valdespin makes his bones on fastballs and little else.

This is something people say about Valdespin a lot. Those same people might be surprised to hear that in 2012 Jordany Valdespin exhibited very little difference — in terms of his batting average — between fastballs, change-ups, or breaking pitches. Thus spoke Pitch F/X (click image to embiggen): 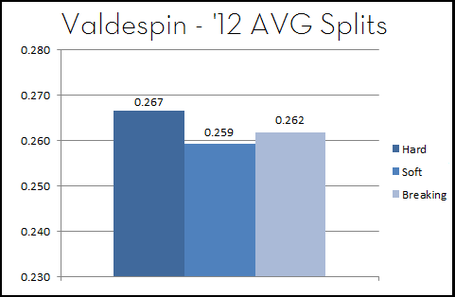 Specifically, this data comes from Valdespin's Pitch F/X page over at Baseball Prospectus. There are a couple of qualifiers here. First is that obviously these blanket terms incorporate numerous pitch types. In fact, here's the breakdown:

The second is that you'll notice these numbers don't add up to Valdespin's overall batting average. That's because as great as Pitch F/X is, it still misreads or just plain misses a handful of pitches here and there.

But the general thrust of the data remains sound. Valdespin hit fastballs nearly as well as he hit other, softer pitches in 2012. In fact, his best effort came against sliders (.333). Overall, he did fare better against harder stuff, but the delta is between five and eight points. That's two to three hits in the grand scheme.

Part two of Cerrone's statement is sort of a rider on the back of the whole "fastball hitter" idea:

Preconception no. 2: Since Valdespin supposedly struggles against breaking pitches, he can't hit lower in the lineup, where worse protection allows pitchers to work around him more, throwing fewer fastballs.

Once again, let's go to the data (once again, thanks to Baseball Reference):

Finally, that brings us to the third one:

Preconception no. 3: Valdespin's poor plate discipline precludes him from being a good everyday player.

Just about anywhere you look people are writing Valdespin off thanks to his poor plate discipline, which is understandable. His 4.9% walk rate and 21.4% strikeout rate certainly don't make him look like a future star.

And while we're on the Angels, look over to my favorite Valdespin comp, Erick Aybar (4.0, 11.0) and his 3.4 WAR. Despite an uptick in contact this season, the speedy roving infielder has long made himself an extremely valuable piece for the Halos while often posting high strikeout rates and sub-five walk rates.

What's more, there's hope for improvement here. If you divide Valdespin's season into two halves you see a stark difference:

And if you want to add some narrative to those numbers, consider his walk rate as compared to his playing time. When you delve into those splits, you see a marked improvement after Valdespin begins seeing action on a more consistent basis. That period unofficially began on July 5th, the day he returned from his last major stretch in Triple-A.

Let's look at those results graphically: 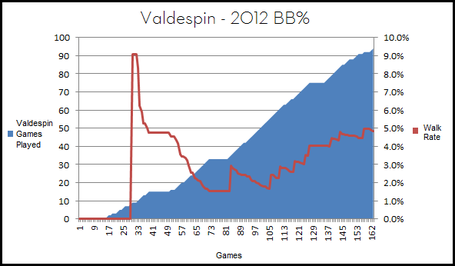 Not bad, but let's see if we can make that a little clearer. First, let's cut out the early spikes in his walk rate until it finds a more normalized baseline: 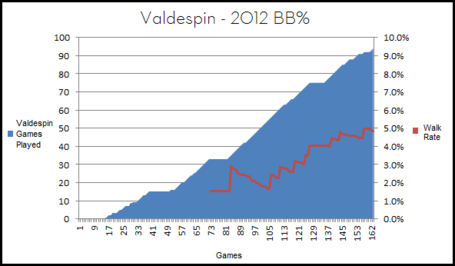 Better. Now let's white out the space on the graph that represents games where Valdespin did not play: 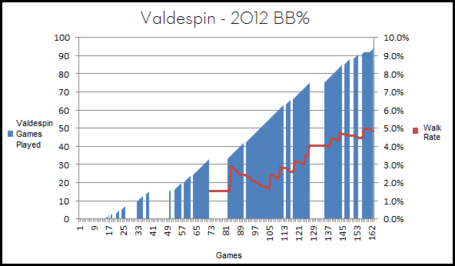 At this point the narrative becomes pretty clear. As Valdespin's regular playing time increased, so did his walk rate. And that's on the heels of a minor league walk rate that's been climbing for the past three seasons.

He is still very capable of improving. Despite the advanced age for a rookie, he only amassed 1,718 minor league at bats. That's roughly 800 fewer at-bats than Wilmer Flores.

I'm not trying to say that Jordany Valdespin is going to be a breakout superstar with regular playing time in 2013 -- not that he'd have to be to surpass Daniel Murphy's pedestrian 1.8 WAR this season. Hell, I'm not even sure I'd give Valdespin a regular starting spot; I sort of like the prevailing idea of a super-sub, though one that still compiles upwards of 400-500 plate appearances.

What I am saying is that it's way too early for us to begin making up our mind on Valdespin, especially if we're doing so based on faulty information.