Share All sharing options for: Today in Mets eBay Superlatives: A Famous Clash

There are many, many fierce rivalries in sports, which is to be expected when you combine the intensity of those who support teams with the natural stresses of competition at the highest levels. Rivalries like Yankees-Red Sox, Duke-North Carolina, Barcelona-Real Madrid - these have brought some of the most famous games and moments in their respective sports, and when these teams match up, fans become giddy with anticipation of the prospect of another classic battle.

Which brings us to today's eBay find of the day, which comes from one of those famous clashes. 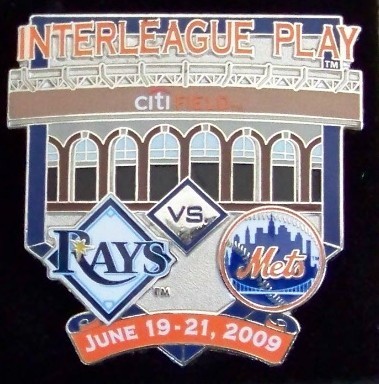 Yes, in years to come, travelling bards will sing songs of the glories of Rays-Mets matchups of yore.

This is part of a series of collectible pins that marked each team's first visit to Citi Field, for reasons that escape me. I suppose it's something that I could see being a thing for certain teams - the Yankees, the Braves and Phillies, maybe the Cardinals or Dodgers; teams that at least some Mets fans actually care about.