Sometimes eBay's depths can be plumbed for spectacular treasures; other times, for some of the most ridiculous objects available. Here we're mostly interested in the latter. Today, the greatest prospect in Mets history.

A lot of times after a player leaves the Mets, if he doesn't have a ton of success I forget he exists, for the most part. Obviously there are exceptions - Mike Piazza wasn't that successful as an ex-Met, but I'm not about to forget about him. But most guys disappear into the aether after they leave Queens.

That is why when I came across this on eBay today, it took me a second to come up with a reaction. 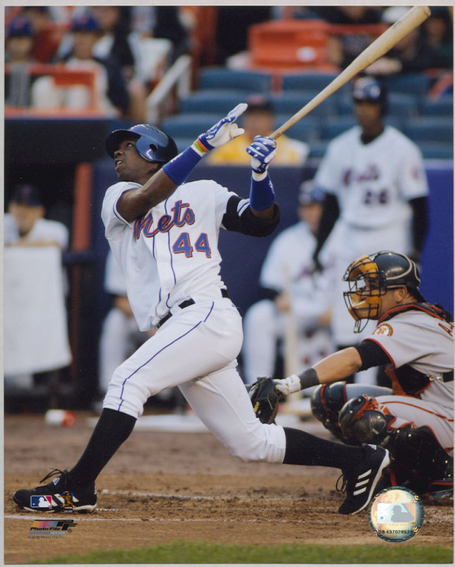 Sorry about the size, but it's Blastings Thrilledge, so I think it's worth it.

I thought I remembered that at some point in 2006, there was a rumor that the Mets were going to trade Milledge basically one-for-one to Oakland for Barry Zito. As it turns out the only thing I can find on it is from 2005 (the winter, which is probably why I was thinking 2006) instead, and there's some fun stuff in there. Evidently Aaron Heilman was also going to be involved, which led to this in the comments.

How about Cano and Wang for Zito?

C'mon. Those two are better than any of the Mets youngsters!

Also, the Yankees couldn't sign Zito long term if they ever got him.

This is all just too good.

Milledge is now playing for Tokyo Yakult Swallows in Japan, which sounds about right. I don't know if any Swallows fans are planning to bid on 8'x10' photos of him, so if you want it, move quickly.