Night Cap: With Dickey's Final Start In The Books, Mets Lose In Extras

The Mets came back to tie the game after R.A. Dickey yielded three runs, but they wound up losing in extra innings.

Share All sharing options for: Night Cap: With Dickey's Final Start In The Books, Mets Lose In Extras 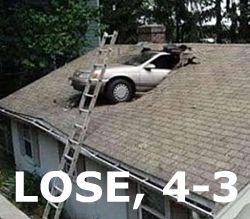 Given the current state of the Mets, R.A. Dickey's final start of the year was the last major event on the team's calendar for the year. It certainly could have gone better, but Dickey went six innings, allowed three runs, struck out eight, and walked none. It definitely could have gone worse.

Despite his usual penchant for the strikeout and stinginess with the walk, Dickey gave up a couple of solo home runs, the first of which was hit by Gorkys Hernandez in the fourth. Rob Brantly hit the next one in the fifth, and the Marlins had a two-to-nothing lead.

Following Brantly's home run, however, Dickey struck out five consecutive hitters. The fourth of the five strikeout victims was Adam Greenberg, the player whose major league career had — until tonight — consisted of one plate appearance in which he was hit in the head by a pitch that gave him a concussion. The Marlins had signed him to a one-day contract so that he could get his wish: one more at-bat in the big leagues. Dickey made quick work of Greenberg, the Marlins' only feel-good story of the season, as he struck him out on three pitches.

With two outs in the sixth and nobody on base, though, the Marlins were able to tack on a run with a trio of consecutive singles by Jose Reyes, Giancarlo Stanton, and Carlos Lee.

The Mets' offense looked as ineffective as it often has lately through the first seven innings, but they started a rally against Miami starter Jacob Turner in the eighth. Andres Torres flew out to lead off the inning, but Jordany Valdespin came up next and doubled. The Marlins called upon Mike Dunn to face Daniel Murphy, who singled to advance Valdespin to third. With David Wright coming to the plate, Ozzie Guillen turned to Heath Bell.

The talkative, struggling Bell promptly gave up a single to Wright to plate the Mets' first run and threw a wild pitch to plate the second. Scott Hairston then chopped an infield single between third base and the mound to bring home the tying run and give the Mets a little hope.

The bullpen did just about as much as it could to keep the game alive. Manny Acost had thrown a scoreless seventh inning, and Bobby Parnell threw two scoreless frames after the Mets tied it up. The game went to extra innings as neither team scored, and three relievers — Elvin Ramirez, Justin Hampson, and Jon Rauch — recorded one out a piece to keep the Marlins off the board in the tenth.

Collin McHugh was called upon to start the eleventh inning, and Jose Reyes smoked a triple to lead things off. It sure felt like that's when the game ended.

Terry Collins had McHugh intentionally walk Stanton and Lee to loaded the bases and hope for the best, but he recorded just one out before Donovan Solano hit a chopper up the middle that ended the game.

After the game, R.A. Dickey revealed that he's scheduled to undergo surgery for a torn abdominal muscle later this month. He's dealt with the injury since April, which makes his incredible season even more unbelievably than it was when the night began.

The Mets' final game of the season takes place at 4:10 pm on Wednesday. Jeremy Hefner gets the start. 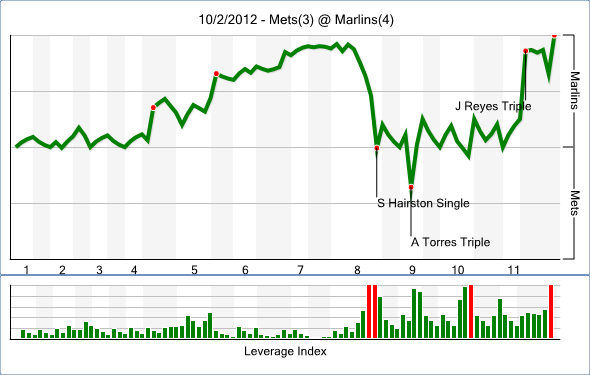