Today in Mets eBay Superlatives: One of These Things...

Sometimes eBay's depths can be plumbed for spectacular treasures; other times, for some of the most ridiculous objects available. Here we're mostly interested in the latter. Today, two pitchers who changed Mets history in very different ways.

Share All sharing options for: Today in Mets eBay Superlatives: One of These Things...

One of these things is not like the other. 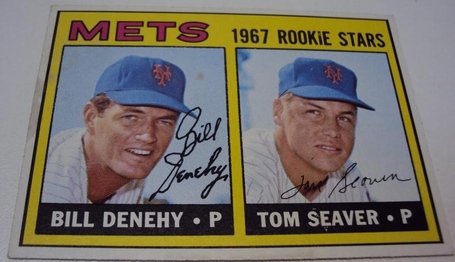 You all know Tom Seaver. All that needs to be said about him is that my father, lifelong Mets fan, named me after him. He is the best.

Bill Denehy is a bit different. I was mostly unaware of him until I came across this card. He played for the Mets for only that one year, and was pretty bad in fifteen appearances. He was traded after the season. In that, he contributed more to the Mets than he ever could as a pitcher (mostly because he was bad in 34 other major league appearances across two seasons).

Bill Denehy was traded to the Washington Senators for Gil Hodges. Hodges, as you probably know, is one of only five numbers retired by the Mets (well, four numbers including Jackie Robinson and one name). Seaver, of course, is another.

At first glance this is one of those hilarious rookie cards that looks silly soon after - haha, Tom Seaver and Bill Denehy! One of these things isn't like the other! - but The Other Guy in this one had a surprising impact on team history. So this one becomes a bit less funny, and a bit more cool.