Share All sharing options for: Night Cap: So Long, 2012 Season

On the final day of the 2012 season, the Mets and Marlins were both wrapping up a disappointing season. Each team took its own path to arrive at its losing-record destination, but there wasn't much of anything to play for on the final day of the year. The Mets had fourth place in the National League East wrapped up well before the game began.

This being the last Mets game of the year, though, it was much more enjoyable to watch this incarnation of the Mets go out on a high note than it would have been to watch them lose.

On a day when many teams were sending out starting pitchers to give the regulars rest for the postseason, Jeremy Hefner started for the Mets out of necessity. But Hefner threw 7.2 innings with 7 strikeouts and 2 walks and gave up just 2 runs. His 5.09 ERA for the season won't look pretty all winter, but aside from his zero-out, seven-run start, he was at the very least a serviceable pitcher for the Mets.

Andres Torres, of all people, hit a solo home run to get the Mets on the board first. Scott Hairston tacked on a two-run home run, and Ike Davis sent his 32nd home run on the season over the fence to plate the team's fourth and final run of the afternoon.

Having allowed a run-scoring single to Gorkys Hernandez in the sixth, Hefner cruised through the seventh but ran into trouble in the eighth. After stirkingout Donnie Murphy, he allowed a single and issued a walk. Elvin Ramirez was summoned from the bullpen and gave up a single to Jose Reyes. Luckily for the Mets, Hernandez was caught between second and third on the play and easily tagged out.

Kelly Shoppach's ensuing passed ball allowed the Marlins to score their second run, and Ramirez followed up with unintentional walks of Giancarlo Stanton and Carlos Lee to load the bases. With that, Terry Collins turned to Manny Acosta. The enigmatic righty retired Donovan Solano with ease to get the Mets out of the jam.

Bobby Parnell closed out the season with a flawless ninth inning, and he should get some consideration for the gig in 2013, even if Frank Francisco is one-hundred percent healthy to begin the year. 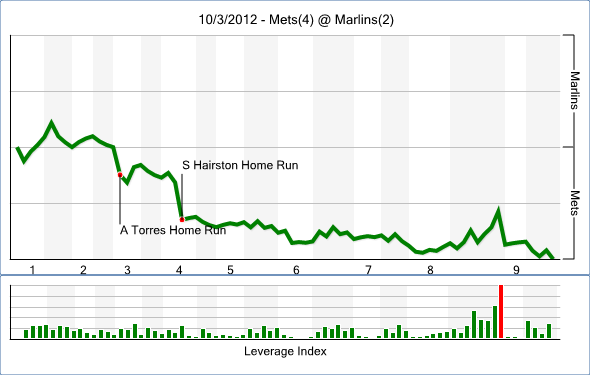