The Mets' forgotten second half

A look back at moments from the second half that may have slipped your mind.

Share All sharing options for: The Mets' forgotten second half

The Mets' second half of the season wasn't quite as fun as the first half. Johan Santana and Dillon Gee's seasons ended early. Multiple everyday players struggled after strong first halves. And playoff probability plummeted to zero. Still, R.A. Dickey's Cy Young campaign, Ike Davis' revival, and the emergence of Matt Harvey ensured that July, August, and September weren't completely lost months. Mixed in with these major stories were many minor happenings. This post recalls moments from the second half which may have slipped your mind.

Five different Padres pitchers combined to walk Baxter five times in an early-August tilt at Petco Park. No one wanted any part of Baxter that night; of the 25 pitches he saw, just 5 went for strikes. His OBP jumped from .390 before the game to .425 after. He scored just one run but the Mets still won 6-2 behind a strong six-inning effort from Jeremy Hefner. Baxter had this to say about his performance:

I'll take a walk any day. Walks are good. And I'll take them.

R.A. Dickey forced to remove friendship bracelets during a game

Dickey's daughters made him friendship bracelets to wear during his climb up Mt. Kilimanjaro in January. He liked them so much that he continued wearing them long after he reached the summit of the African peak. So he was understandably perturbed when umpire James Hoye forced him to remove the bracelets during a game in Cincinnati in mid-August. No umpire had enforced the uniform rule all season; why start cracking down all of a sudden? Dickey struggled in that game but rebounded nicely down the stretch. He posted a 2.34 ERA over his final nine starts. And he inspired me to make my own Mets-themed friendship bracelet: 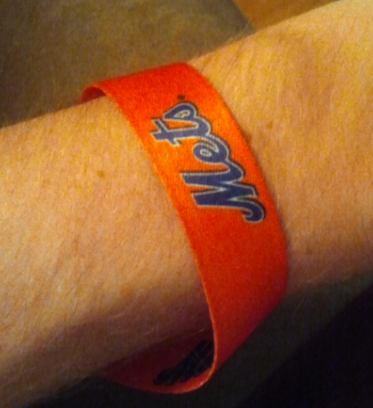 AKA Beltran's Revenge. The Mets trailed the Cardinals 5-4 in the ninth inning of a Labor Day game in St. Louis. Andres Torres led off the frame with a double. However, the Cardinals appealed the play at first base, challenging that Torres missed the bag on his way to second base. First base umpire Dave Rackley concurred and called Torres out. Replays seemed to indicate that Torres did touch the bag. At best, evidence was not conclusive enough to overturn the call on the field. The Mets failed to score after Torres was called out and the Cardinals won.

After the game, it was learned that Beltran told Cardinals manager Mike Matheny to challenge the play. Eagle-eyed Beltran had been watching the game on television in the clubhouse and thought Torres missed first base. I suppose all those years Beltran spent with the Conditioned Ocular Enhancement training system really did improve his vision.

This is probably the least forgotten item on this list. Behold the painting of Shea Stadium presented to Chipper Jones by the Mets organization: 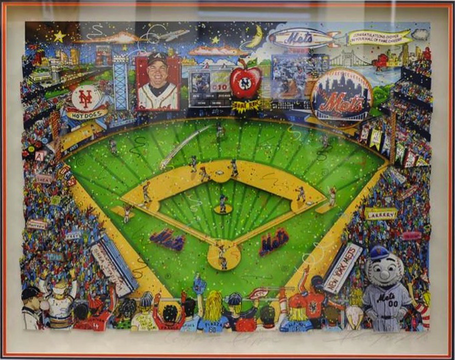 Maybe the Mets were just trolling Chipper's son Shea, who was named after the legendary stadium. "Yes son, you were named after this."

Check out my similar post from the All-Star break, "The Mets' Forgotten First Half."