Share All sharing options for: Let's Go to the Videotape: Opening Day at Shea, 1972

During the playoffs, we often see players and fans alike struggling to deal with the plunging October temperatures, blowing into their hands, wearing cowls, and so forth. Sincethe Mets have stubbornly refused to make the playoffs again this year, however, the closest we can come to seeing them engage in such behavior is to view these clips from NBC's coverage of Opening Day, 1972, when the Amazins took on the Pittsburgh Pirates at Shea Stadium. 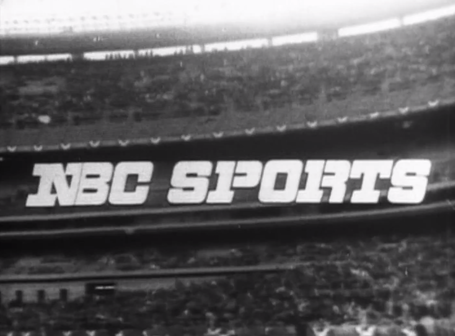 This first clip cuts together a few choice pieces of NBC's broadcast and was posted by the makers of No No: A Dockumentary, a forthcoming movie about Dock Ellis. The pitcher, who spent some time in a Mets uniform at the end of his career, is mostly known for (allegedly) throwing a no hitter against the Padres while still tripping on LSD. Since no footage of this game exists, and since Dock did not cop to indulging in psychedelics until many years after throwing his no hitter, we can never know for sure if he did. In this first clip, he appears to be functioning in a normal manner and not betraying any belief that the outfield fences look like they're melting.

More importantly for Mets fans, we get a glimpse of Shea on a cold, drizzly April afternoon. The stands appear to be 3/4 full. The non-sellout may be due to the weather or due to fan resentment stirred up by the first ever player's strike, which delayed the start of the 1972 season by two weeks. The Pirates repair to their dugout with towels wrapped around their necks, an odd weather-proofing choice I've never seen before. We also see Roberto Clemente appearing in what would be his last ever opening day, as he strikes out against Tom Seaver. The Mets went on to win this one, 4-0, with Seaver pitching the first 6 innings and Tug McGraw earning the save by throwing the last 3, but the Pirates would win the NL East that year, though they would lose to the Reds in the NLCS.

If you've never watched baseball broadcasts from this era, what will undoubtedly strike you is the camera angle. Virtually all footage during at bats comes from one camera, seemingly placed high above the batter's head, which provides almost no angle on the pitches or the batter's reaction thereto.

For me, what I found most interesting was the crowd noise. A sustained murmur can heard throughout the clip, the sound of thousands of people talking to each other all at once. You don't hear that in ballparks nowadays. Does the preponderance of visual stimulation and audio cues in ballparks now ("Every-body-clap-your-hands!") prevent this kind of dialogue, or merely drown it out during TV broadcasts?

This clip presents a few unedited moments from the beginning of the same broadcast. You'll see MLB commissioner Bowie Kuhn throw out the pitch of the season to Jerry Grote, and in the process nearly brain some idiot who couldn't wait two seconds for him to complete his ceremonial task. You'll also see Yogi Berra taking the field for the first time as manager of the Mets, and Bill Virdon do the same for the Pirates. You'll then see Tom Terrific strike out the first batter he faces of the season, because of course. You'll also see NBC announcer Jim Simpson briefly mistake the Pirates bat boy for Al Oliver, who he, um, does not resemble at all.