Sometimes eBay's depths can be plumbed for spectacular treasures; other times, for some of the most ridiculous objects available. Here we're mostly interested in the latter. Today, an advertisement (for some reason).

In my relatively short and somewhat intermittent time finding eBay sales to lampoon here, I've come across some real crap. There's a lot being sold that's awful and completely worthless - but somehow, even when something outright sucks, there's a thread of use to it. I can see where, if it wasn't horrible, I might want to have it - that is, there's a major flaw that, if corrected, would make the item attractive to someone.

Today's entry is the exception. 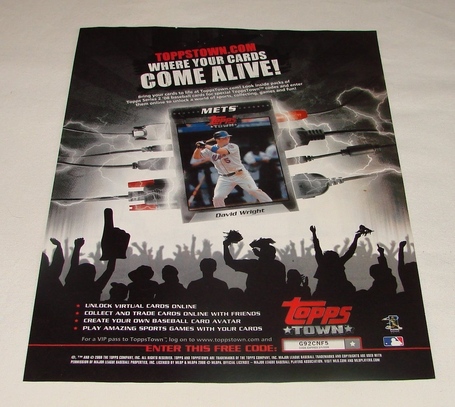 I know exactly what this is, as it's an ad that I'm pretty sure I've seen before, in Sports Illustrated or something similar. What I don't get is why anyone would want it. It has a picture of a David Wright card, but that's not enough to convince me to buy a page ripped out of a magazine. Even that itself isn't that notable; it's not like David Wright is a particularly obscure player. I suppose it's maybe worth something for the FREE CODE to Topps Town, but since I haven't the faintest idea what the hell Topps Town is, that's not a great selling point. Also I can see the code clearly, so...there is literally no reason to buy this.

It's not signed. There's no contest to meet David Wright or anything like that. The ad isn't a Being John Malkovich-style portal into Wright's head, or anything. It's going for $5.99 right now, so I guess if you want to drop six bucks on whatever this is supposed to be you should act now, because there are no bids on it. Which is a real shock.