Jesse Orosco appeared in more games than any pitcher in history. And in Mets history, he appeared in several of the very best.

Share All sharing options for: Top 50 Mets of All Time: #40 Jesse Orosco

"I never have a sore arm in the morning. I'm just lucky. I never put ice on the arm. Just give me the ball."

The left-handed reliever who doesn't get a sore arm is liable to do something crazy, like appear in more major league games than any pitcher in history. That's Jesse Orosco. He flung his mitt into the air, and nobody ever saw it come down.

Orosco's grandparents were born in Mexico. His father, a construction worker, played sandlot ball for decades in Santa Barbara, California. The Twins drafted Jesse out of Santa Barbara City College in 1978 but shipped the left-hander to New York to complete an earlier trade. In the deal, the Mets sent away Jerry Koosman, who stood on the mound as the franchise won its only World Series, in 1969. Store this factoid away.

Orosco zipped up to the major leagues, making his debut at 21 years old in 1979. (We'll return to this bit, too.) But after getting his look, the lefty went down to the minors for seasoning, getting a cup of coffee in 1981 and his real tryout when manager George Bamberger came aboard the next year.

"We dug into him," said the pitching coach Bill Monbuquette. Bamberger taught Jesse his personal slider technique from his days as a minor league pitcher. "I'll tell ya," Orosco remembered. "It's one heckuva pitch. I wasn't getting beat on breaking balls any more." 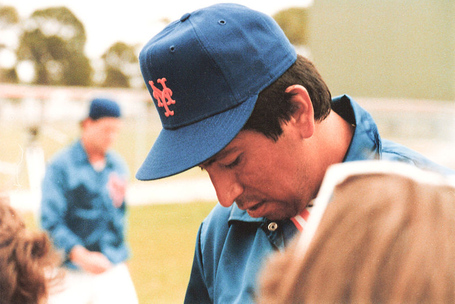 In his peak years, Orosco hurled a 91-93 MPH fastball, a deadly slider almost as hard, and a slow slider or sliding changeup. As he aged and his fastball lost gas, the slider became his first pitch. When that flattened in his late career, he threw a split-finger changeup. Orosco was cool-headed and not prone to overthinking. "In the big leagues somebody loses everyday," he once said. "I haven't changed anything in five years. I don't bang on things."

Orosco was merely months into a promising 1982 when a construction accident claimed his father's life. The young pitcher went home to mourn with his mother and six siblings, and when he returned, "he was the same guy, still quiet," his manager said. "But now he was ready to blow your butt away." 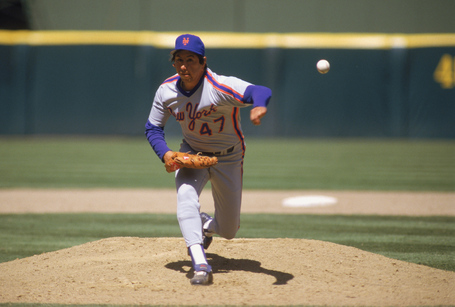 Jesse had an exceptional 1982, carrying a 109-inning load mostly in middle relief (he made two starts) and posting a 2.72 ERA. In 1983 he lifted off. Shouldering 110 innings, Orosco punched out 84 while walking 38, but truly remarkable was the way he prevented batters from squaring up. Of 76 hits against him (6.2 H/9), only 14 went for extra bases, just three of these home runs. Opposing hitters slugged .269, lefties .208, and Orosco showed off what would become a habit of stranding runners ahead of the expected rate (between 78-84% each year from '82-'86). The result was a minuscule 1.47 ERA, an All-Star appearance, and second runner-up for the National League Cy Young Award.

In these seasons Orosco made a relief tandem with the catch-me-if-you-can sinkerballer Doug Sisk, and together they were members of the "Scum Bunch," a sort of social club for canned beer aficionados. In 1984, when neither righties nor lefties hit .200 against Orosco, he edged in on Sisk's closing duties and saved 31 games, a club record. Enter Roger McDowell in 1985, replacing Sisk as Orosco's main tag-team partner and sliding rapidly into manager Davey Johnson's good graces. For long stretches, the 27-year-old lefty sat for the rookie McDowell, and memories of that time tend to differ. "He didn't have the same snap last year," Johnson said in reference to Orosco's 1985 performance, remembering arm troubles that the pitcher emphatically disputes. Orosco found the conventional phrasing: "I don't run the club." 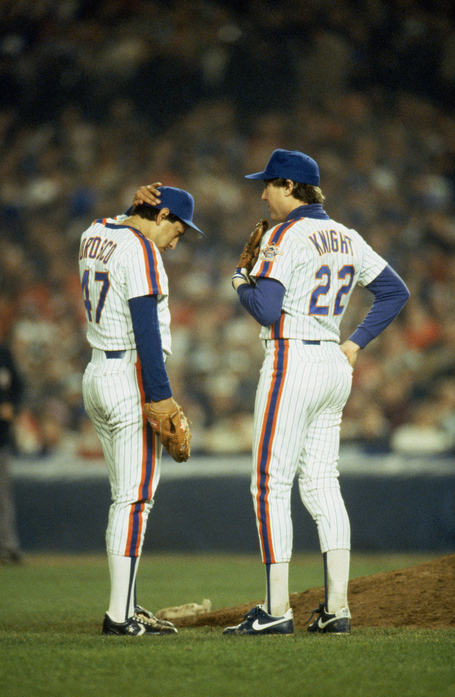 Then, 1986. Off the bat the Mets won 20, lost four, and Jesse threw 16 scoreless innings. "This is the old Jesse," Keith Hernandez said. "I know he's our bread and butter." ("He screams at you every pitch," bread and butter put in. "You're afraid to mess up.") In fact, 1986 was only marginally a bounce-back year for Orosco, with a half-point knocked off his ERA while his strikeouts declined and FIP increased. McDowell was still the favorite son and Orosco still a mild disappointment in light of his untouchable beginnings. But, of course, all this is a footnote. We remember Jesse Orosco not for the regular season but for what came after.

Scene: October. Orosco threw a perfect inning behind Dwight Gooden in Game One of the Pennant. With the series tied 1-1 in New York, Orosco entered with his team down in the eighth and retired six consecutive batters, getting the win on Lenny Dykstra's walk-off homer. Nine up, nine down. In Game Five, he pitched two perfect frames behind Doc's 10-inning effort — 15 up, 15 down — followed hard by a hurly-burly three-inning conclusion of the series. Orosco blew the save but got the win, when in the 16th inning the Mets' offense put three runs on the board. Orosco turned around and performed the tightrope act of his life, allowing two runs on three singles in the bottom half, but striking out Kevin Bass to send the Mets to the World Series. Despite winning three games — some win, that last! — he lost out on the series MVP to the Astros' ace, Mike Scott. 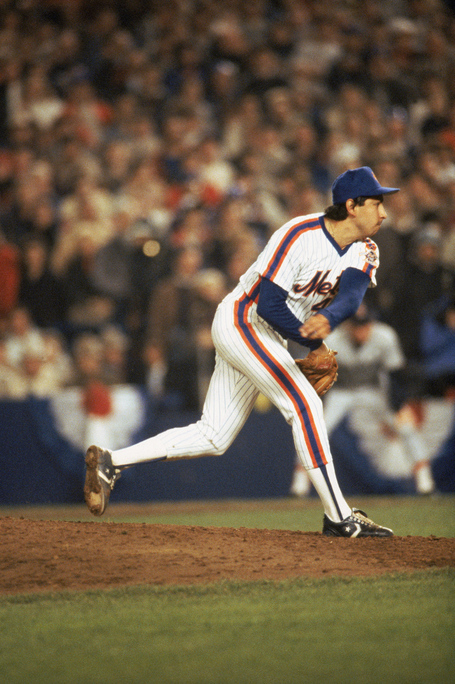 A note on that. It is a fact that quality baseball minds of the twentieth century, from Jim Bouton to Bill James, talked about and cared about pitcher wins. They weren't stupid, but they had a style of thinking that now seems old-fashioned. Today we like to break performance down into component parts and shove luck and contingent circumstance out of the frame — excellent methodology, it turns out, for a GM or analyst. For years, though, baseball was not conceived this way. "Talent" was not something to be isolated; it was baked into the end product, where it ceased to exist as its own element. A player was judged more or less as a person is in daily life: inextricably from the accidents of fortune. I'm overstating the case to make a point, but suffice it to say that in a list of "Top 50 Mets," fans of another temper might place good-fortuned Orosco much higher than we. What, after all, is "Top"?

There are strange symmetries in Orosco's career. He came over in a trade for Jerry Koosman, the player who pitched the last out of the 1969 World Series. His victim in that spot? Davey Johnson. On October 27, 1986, Roger McDowell gave up a two-run double in the eight inning of the seventh game of the World Series, and Jesse Orosco was brought in to end it. He lined out, grounded out, and struck out his marks, then watched in the dugout as Darryl Strawberry homered. Then he was up in the batter's box with men on first and second base. "Buddy Harrelson told me, 'If the infield comes in, punch the ball,'" he said. He did, for an RBI, and he was in a place to shepherd Davey Johnson's club to a World Series title. Seven years before, by the way, Orosco had made his big league debut in a bases-loaded spot and popped out the hitter. Bill Buckner.

Orosco had pitched two scoreless innings in Game Two, a Mets blowout, and bailed out McDowell to save Game Four. In the great Game Six he faced only one batter (in a McDowell-made bases-loaded jam) and popped out the hitter. Bill Buckner. Taking the mound in the ninth inning of the concluding game, the lefty had thrown 12⅔ postseason innings and surrendered runs in two of them. He had struck out 15, he had walked two. Jesse Orosco got a popup from Ed Romero and groundout from Wade Boggs. With a 2-2 count, Wally Barrett swung though a high and outside fastball. Jump. Glove flip. Down to the knees. Mobbed by his teammates. The Mets were World Champions. 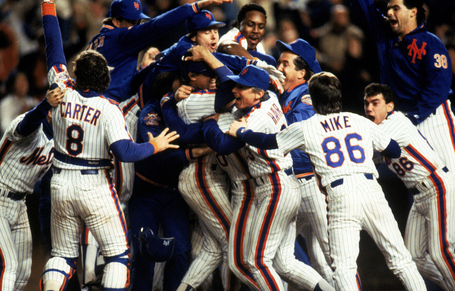 Orosco will enter general baseball lore as a left-handed energizer bunny, admired for his longevity more than his punch. After one more year with the Mets, unproductive and unhappy with his use, he got his wish and was traded away, to Los Angeles, in an eight-player three-team deal masterminded by A's Vice President Sandy Alderson.

In the ensuing years, Orosco found his niche on brand new terrain, racking up appearances one or two left-handed batters at a time as a so-called "specialist." Seemingly born to the role, he needed only ten pitches to warm up in the pen and could be used four days in a row. In 1988 Peter Gammons called Orosco "over the hill." He pitched for another decade-and-a-half.

So that is Jesse Orosco's legacy. But for the Met fan, it's a different story. The record-setting career? Just a long fizzle after the cork popped from the champagne. Or -- try it this way — the off-camera descent of Jesse's glove. 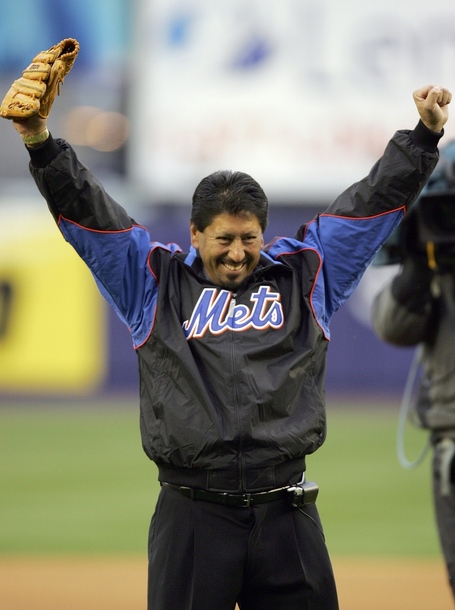