Following the worst season of his career, should we be paying more attention to the concussion Thole suffered back in May?

Share All sharing options for: Did The Concussion Ruin Josh Thole's Season?

One of my favorite features of the offseason thus far was James's look at the Mets' "Forgotten Season." It was an interesting reminder of the numerous moments and storylines that seemed important at the time but ultimately faded into the recesses of the collective consciousness as the summer rolled on. Things like Rob Johnson: Relief Pitcher, Mike Baxter's five-walk game, and David Wright's broken pinky.

However, one that eluded even the postseason recap was Josh Thole's concussion. Suffered back on May 7 at the hands of Ty Wigginton — or perhaps I should say at the shoulder of Ty Wigginton — in an early-season match-up with the Phillies. Remember?

Now that we're all on the same page, I want to re-visit an interesting idea that was first brought up in last week's 2013 Catcher Outlook piece by Chris McShane. The general tone of the piece revolved around Josh Thole's underwhelming 2012 season and the need for a replacement come 2013. Discussion in the comments section concurred.

However, reader 'barry_hal_oliver_24' — who, to his credit, had not forgotten about the concussion — asked, 'What were Thole’s stats before and after the concussion?'

Well, I did a little research and was rather surprised by the results:

I dug a little deeper and what I found was pretty interesting. The following charts all represent Thole's numbers directly following his return from the disabled list until the end of the 2012 season (click images to embiggen): 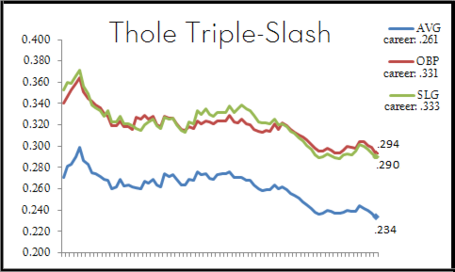 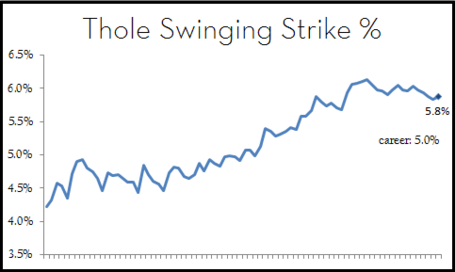 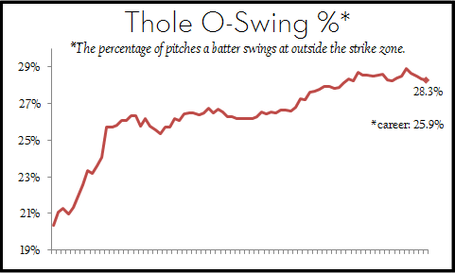 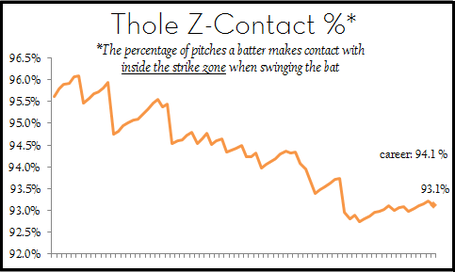 A similar trend is visible throughout many more of Thole's key offensive indicators.

Now this is far from conclusive evidence. It's unclear exactly how much the concussion may have affected Thole in the latter portion of the season. For all we know he fully recovered during the 22 days he spent on the DL and all these data just point to a mediocre hitter that hasn't kept up with the rising level of pitching around the National League.

But the stark downturn following the injury at least begs the question about his true level of talent. Coming into 2012 Josh Thole was no star, but after 672 major-league plate appearances it seemed like he was, at the very least, a serviceable regular. And though that's no definitive sample, it's enough to perhaps compel the Mets to consider giving Thole a mulligan going into 2013.