Today in Mets eBay Superlatives: Something actually worth money!

Sometimes eBay's depths can be plumbed for spectacular treasures; other times, for some of the most ridiculous objects available. Here we're mostly interested in the latter. Today, a Thing that is actually good.

Share All sharing options for: Today in Mets eBay Superlatives: Something actually worth money!

Typically in this space, I make fun of awful Mets eBay sales, because most of the things that are interesting on eBay are interesting because they're bad. There are, however - against all odds - also some pretty awesome things to be found on eBay, if you look long enough and sift through enough crap. Today's entry is in that camp. 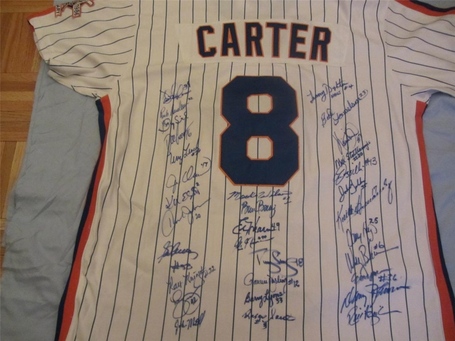 It is, of course, a 1986 Mets jersey of the Gary Carter persuasion, signed by members of the team. It doesn't appear to be the entire team (it claims 32 signatures), but many of the big names are there, including Keith Hernandez and Darryl Strawberry. Beyond all that it's just cool that it's a Gary Carter jersey that was used, because Gary Carter was and is the best.

I don't really have any jokes or anything this time, I just think this is a cool thing, and sometimes that's nice too. Alas it has sold between its discovery and the time of writing, so we're all out of luck. Though it ended up selling for over $350, so at least for me, this was over before it started.