This Tuesday in Harlem, R.A. Dickey donated books, read to kids, and talked to me about Star Wars.

Share All sharing options for: The Very Hungry Dickey

"You ever meet the Yankee captain?"

The question is put forth by a fifth grader in his school's auditorium in East Harlem. R.A. Dickey, surrounded by adults in Capital One tee-shirts and waiting for the event to begin, leans in to hear the student, then laughs.

At DREAM Charter School on 103rd Street, it takes awhile for the adults to get settled. There are reporters and camera men, there are corporate people, and there are the tee-shirt wearers, who have spread around kids books being donated to the school. A young principal claps in a rhythm that goes "1, 2, 1 and 2," and about a hundred fourth and fifth graders echo the rhythm, raise their hands high, and clap their mouths perfectly shut. Adults circle around snapping pictures with bright flashes. 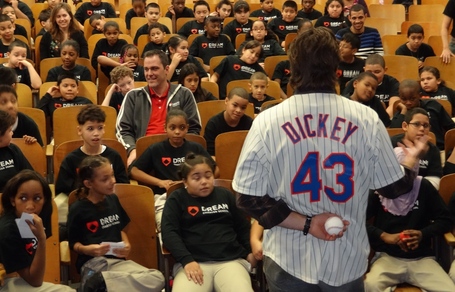 "I have four kids of my own. Talking to you guys makes me wish I had a lot more," begins Dickey. "Who knows what a knuckleball is?" Hands.

"I'm going to teach you how to throw it, so there will be no excuse for any of you not to become big league ballplayers." Laughter.

R.A. Dickey grew up in Tennessee without much money. His father was mostly absent, and his mother drank. He fist fought. He snuck into empty properties and spent nights alone. He pent in the pain of repeated sexual attacks by a babysitter and another by a larger boy. In Harlem on Tuesday, I wonder if the students were told Dickey's hard-scrabble story and I wonder what they make of it. Or perhaps he's just a famous person who has people to take pictures of him.

"I had good years as a pitcher despite a lot of people telling me I wasn't good enough. They are the dream busters. It's going to be the same for you guys as you grow. You wouldn't believe that reading makes me a better pitcher, but it does. It's going to make you a better whatever-you-choose-to-do. Reading teaches patience. More than patience, it teaches imagination. And imagination is what helps you be a knuckleballer. You know how hard it is to imagine throwing a 65 mile-per-hour pitch and think you can be good at that? And not think they're gonna hit it right off your forehead? That takes imagination." 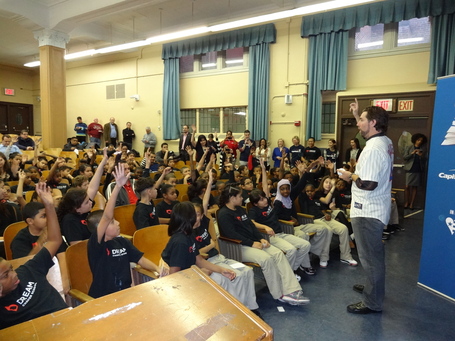 I have in my pocket a few questions brainstormed with my wife, a public school assistant principal in Brownsville, Brooklyn. She wants to hear about his doggedness, not on the ball field but where life is not fun. R.A. Dickey went from first-round pick to forgotten when a problem was spotted with his pitching elbow. In his first decade in the minor leagues he moved thirty-one times. Then, he spent seven consecutive years in AAA Oklahoma City — they called him "the Mayor" — barely hanging on with a pitch practically nobody throws. I catch my wife's drift. It's easy for kids to be ginned up at an assembly, but it's hard to work hard for the years and years and years that they must. How, R.A.!? 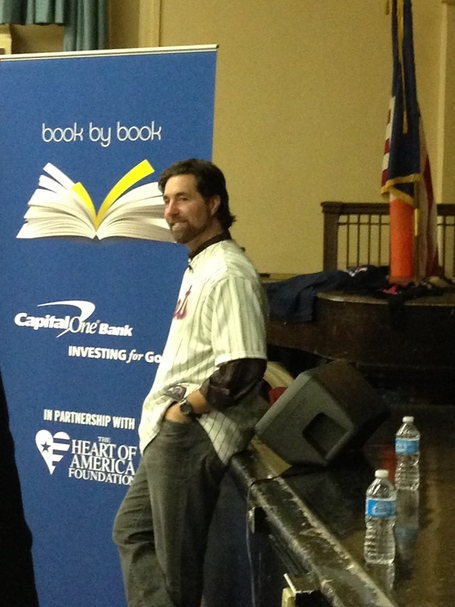 New York school kids have a way being funny and dispersing your somber thought clouds. "You ever hit a home run?" a boy asks Dickey.

"Hit one? I came close. A guy caught it right at the wall."

"I think you were robbed," the kid tells him.

"Do you have any brothers and sisters?" Then, a follow-up question about his sister. Then, "Is your shoulder going to be ready for next year?" Applause.

The assembly wraps up with a unique school cheer: "Uh huh, oh yeah, looking gooooood," and Dickey applauds right back. We "media" follow the pitcher up four flights of caged public school stairs to a cheerful classroom, where he settles into a wicker chair before a large group of small children.

"Do y'all like reading or do you like to be read to? I love reading. I don't have to be read to anymore, but I like it sometimes. First I'm going to teach you the knuckleball." 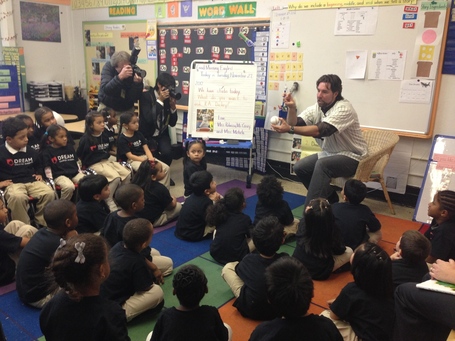 Shaking it off, Dickey settles into deadly effectiveness reading The Very Hungry Caterpillar, changing speeds, making a face, and being every bit the father of four. The kids explode when the caterpillar gets fat, and Dickey milks it shamelessly. 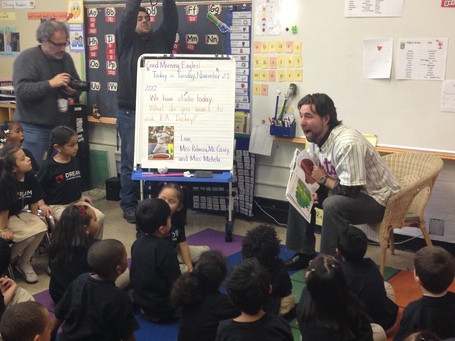 "Isn't that cool?" the Cy Young winner says, still flapping. "Only in a book can you do that."

Kindergartners clear out, and a media scrum coheres with breathtaking speed. "R.A., the trade talks..." We are using low very serious voices. Dickey says the correct things and puts a word in about his winter-time plans in India, volunteering to provide services to forced sex workers. 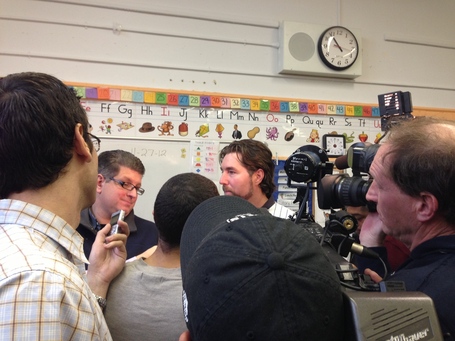 Pressed by my readers' needs, I ask, "What do you make of Disney buying the Star Wars franchise, R.A.?"

"Maybe the best question so far," he says. "I''m nervous. The honest answer is I have a little anxiety about it. Lucas has done them all, you know... The writers are good, though. I believe in the writers that they've hired. I've been tracking it." So he's been tracking it.

R.A. leaves to go raise his kids, and the students return to class.