Entertainer with memoir engages in self-promotion. Writer writes hatchet job about athlete leaving. Sun comes up in the morning.

Share All sharing options for: Ken Davidoff Throws R.A. Dickey Under The Bus As Pitcher's Trade To Blue Jays Looms

Rolling into a season when I had to promote the book in the first months of the season, reporters could say, if I didn't get off to a good start, "This guy's efforts and energies are where they shouldn't be." I left myself open to that with a big risk by putting this book out while I was playing. The reasons why people don't write memoirs of their own while they are playing or performing is because it gives ammunition to the public for them to judge you really quickly if you aren't doing well. So I had a lot of fear about that. I'll be honest about that. —R.A. Dickey

As you probably heard by now, Ken Davidoff wrote a "strictly business" column about R.A. Dickey's contract situation that is really just a forum for his (and apparently others') personal distaste for Dickey. Unfortunately, writing analysis of the business side of a relationship and writing a personal hatchet job are fundamentally at odds, and the contradiction renders every sentence head-scratching from the very get-go:

All about himself once again, Dickey issued the laughable threat that, if the Mets didn't extend his contract, he'd bolt the organization after 2013.

All about himself once again, R.A. Dickey did the exact thing every free agent looking for leverage in the history of sports free agency has ever done. What a selfish louse, threatening to exercise his right to sign for a fair-market price after the Mets rebuffed his offer to stay in New York at a below-market rate.

And what am I missing that makes this threat laughable? The reigning Cy Young winner wants to leave a team that has finished in fourth place every season he's been here?

The Mets are prepared to call the knuckleballer's bluff with flair.

DICKEY: I'd like something close to what I'm worth. I'll even take a little less.

ALDERSON: HA HA HA! FOOL! YOU WOULD MAKE SUCH DEMANDS TO ME? AND RISK LEAVING ALL THIS? /motions behind him to Jeff Wilpon, sitting on a pile of bounced checks, picking his nose.

The Mets are poised to pull this off even though Dickey's unwieldy personality, the same personality that fueled his remarkable climb to greatness, mitigated the Mets' options. Dickey's remarks Tuesday underlined how risky it would be to employ Dickey as a one-year, $5-million, extension-less player in 2013.

What, exactly, about R.A. Dickey's personality is unwieldy, was reflected in his comments at the Christmas party, and is responsible for his greatness? I got the impression that R.A. Dickey's relentless work ethic and self-belief propelled him to a major league rebirth in his mid-30s. But I guess I should have known better after reading this 2005 scouting report from AAA Oklahoma:

This transaction marks a brave new path for the Mets, one in which sound baseball operations trumps [sic] sentiment. This in the same week when the Yankees are giving 39-year-old Ichiro Suzuki, who clocked 10 mediocre weeks and two phenomenal ones in The Bronx, a two-year extension seemingly because fans adored his inability to hit home runs.

He is 38, and while the data on knuckleballers' aging bodes well for the right-hander, it's not a huge sample by which to go. There's reasonable doubt that Dickey can replicate his outstanding 2012 campaign.

Okay. Saying that the reigning Cy Young winner isn't going to repeat his sublime performance is not exactly the best argument I've heard. But surely the damning, clear-eyed analysis is right around the corner...

And, in an underappreciated part of this saga that soared into visibility this week, Dickey can be a handful. He clearly has enjoyed his rise from the ashes into a Flushing folk hero, and while he deserves praise and riches, there's also the matter of him having to coexist peacefully in a workplace. His gift for self-promotion and his love of attention don't endear himself to most teammates. Instead, his durability and outstanding results led him to be appreciated but far from beloved.

The hell? How did we go from promoting the Mets as a contrast to the Yankees who made a decision based on a player's likability to this crap about Justin Turner being miffed he didn't get a chapter in Dickey's book? I hate to shatter anyone's illusions, but R.A. Dickey is an entertainer with a very entertaining story. Yea, he wrote a book and he did the things that most entertainers with memoirs do to promote them. And you know who was more than happy to promote Dickey's story up until today? Ken Davidoff and his colleagues. R.A. Dickey's story was profitable for both the New York media and R.A. Dickey for a long while, but now I guess it only suits one of them, so out you go.

And maybe R.A. Dickey has good reason to view himself as exceptional compared to the rest of the Mets. I can think of one reason: 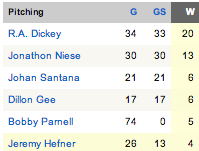 I mean, who really cares what the Mets think of R.A. Dickey? Consider the source: the Mets suck. They are, by and large, a group of 20-year-old disappointments. If you're asking me to choose between R.A. Dickey winning 20 games and going to book signings or literally every other crappy Met, that's an easy choice.

If Dickey can't control his verbiage at a holiday party - "Folks, not today, not with the kids here" was all he had to say to reporters - then how would a full season of uncertainty feel? How many times would Dickey spout off publicly? Or work behind the scenes to make the Mets look bad and boost his own brand?

Our concern now is that that R.A. Dickey — nearly the only person or thing of any positive association with the Mets — is going to sabotage their brand? Memo to Mets Public Relations: Don't allow R.A. Dickey's heartwarming story of redemption and perseverance to sabotage your personal brand, which — as far as I can tell — is currently, "White-collar criminals mismanaging the public's money in order to destroy a cherished cultural institution."

Dickey's love of his narrative, the embracing of his professional challenge, helped him defy the odds. Now it's time for the Mets to let the Blue Jays, armed for a 2013 pennant run, roll the dice on him and build a Dickey-free future in Flushing.

...excerpts from Ken Davidoff's journal, Day 756 in the Dickey-free dystopian future...the last Mets fan spotted at Citi Field was ten weeks ago...I have just filed my 84th column on the zany antics of clubhouse joker Justin Turner...the Mets lost to the Miami Marlins today 198-0...without Dickey here to protect New York City, the reptilian sewer creatures have decided to finally rise up and overtake us...I am writing this journal with the hope that future generations, with the means to go back in time, will discover it and return to December 15, 2012 and stop me from writing my column, "Amazin's won't knuckle under Dickey's laughable threats to leave."