The New York Post columnist relied entirely on WAR to create his 2013 ballot. We love WAR. So does that mean his ballot is flawless? Not necessarily.

This should come as no surprise to you, the astute Mets fan, but in case you didn't know Mike Piazza will be eligible to join the Baseball Hall of Fame for the first time this summer.

With the announcement of the names set to be enshrined less than two weeks away, numerous voters have begun to share their ballots. Piazza's name has appeared on the lion's share of them — a good sign for his chances —but not everyone felt the longtime Met was worthy of their vote.

Now, this is not a piece dedicated to those unenlightened few who would unabashedly assail a player's character based on idle suspicion and back acne. As we all know, it's best not to give the trolls our attention. No, this is a piece about one particular ballot that does not include Piazza for more defensible, but still flawed, reasons.

Before you explode with rage and disgust, however, perhaps you should have a look at Davidoff's voting methodology:

"I looked at every candidate on this ballot and ranked him according to both WARs, Baseball-Reference’s WAR7 (which takes a candidate’s best seven seasons by WAR, to consider a player’s peak) and Jaffe’s JAWS. I rewarded a player one point for finishing first in a column, two points for second, etc. — and then ranked them by lowest score to highest. Bonds, for instance, ranked first because he had just four points; atop all four categories, he received one point for each.

"Using this process, Piazza placed 14th on my list of candidates."

As we all know, each voter can only vote for a maximum of ten players, and there you have it, no Piazza.

That's a thorough, well thought-out, highly defensible process. In terms of his incorporation of more advanced value measures, I applaud Davidoff; he's light years ahead of some of his more gut-oriented brethren. But that doesn't mean he's not wrong. Put frankly, the absence of Piazza on this or any ballot is pure folly.

The problem in this case is summed up in two words: Positional value.

It's quite clear, by his own admission, that Davidoff's methodology is very WAR-heavy. He's using three direct WAR measures and JAWS, which is an average of two more WAR measures.

But the problem with using WAR in this way is that at its core, WAR is a counting stat. While more games played don't always help a player's WAR, they usually do, especially when we're talking about players worthy of Hall discussion. And based on the nature of the position, catchers typically play fewer games than any other non-pitching position. By flatly measuring with WAR, we'd rarely, if ever, see catchers worthy of the Hall when measured against their non-catching contemporaries. Yet we know intuitively that, based on the prevalence of each, a 5-WAR catcher is almost definitely worth more than a 5-WAR first baseman.

To accomplish a fairer, more accurate measuring stick for catchers — and every other position, for that matter — it is imperative to make the distinction for position played. Unfortunately that's easier said than done. Ideally we'd have a conversion factor that would tell us exactly how much a catcher's contributions are worth in relation to those of a first baseman, or a left fielder, or a relief pitcher; however no such generally accepted index exists.

In the absence of a good inter-positional valuation methodology, the next best thing we can do is to isolate each comparison within position, in order to effectively factor out positional value. And that's where the beauty of WAR comes into play. While it may not translate between position, it does translate between time period. Comparing each of these players to their contemporaries at the same position is pointless; we already know they're the cream of the crop. That's why it's much more telling to look at these players in a historical context, against the very best ever at their position. And that's exactly what I've done.

Specifically, for each of Davidoff's chosen Hall of Famers I averaged the same statistics he used — bWAR, WAR7, and JAWS — Baseball-Reference obviously does not make fWAR readily available — and compared it to that same number for everyone that has already been enshrined at that position. Each player was compared against the position where he played a majority of his games; for that reason Craig Biggio is not included. Additionally, Edgar Martinez is not included, as there are no designated hitters in Cooperstown.

View the results graphically below (click images to embiggen): 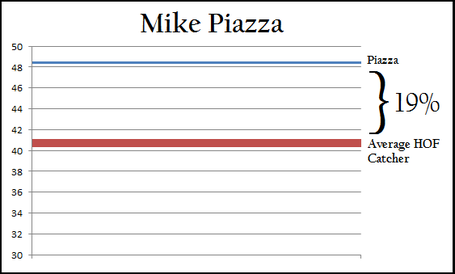 So what is this graph telling us? The average Hall of Fame catcher sported a bWAR, WAR7, and JAWS composite of 40.7 (red line). Meanwhile, Mike Piazza's 48.4 (blue line) is nearly 20% better than the average. On the surface that seems pretty good, but let's look at how everyone else on Davidoff's list stacked up: 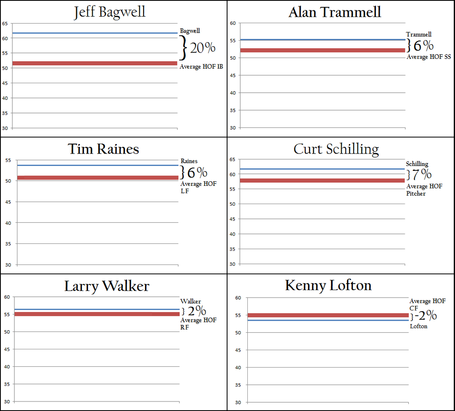 Aside from Jeff Bagwell — who himself has clearly been unfairly evaluated since appearing on the ballot last year — the rest of the candidates all match up less impressively than Piazza against their own positional comp sets. In fact, despite the fact that Kenny Lofton's WAR measures are all higher than Piazza's, he came in 2% below the average for Hall of Fame center fielders. See why it's important to consider position?

The results are similar when you isolate out each of the three statistics at play here. From Jay Jaffe's excellent recent Sports Illustrated piece on the subject of Piazza's Hall of Fame chances:

"Despite his defense, Piazza is tied with Yogi Berra for fifth all-time in career WAR and JAWS among catchers behind Bench, Gary Carter, Ivan Rodriguez and Carlton Fisk; all of those players played in at least 208 more games. Piazza’s peak WAR of 40.7 ranks third behind only Carter (46.5) and Bench (45.9), more than a win per year above the standard (32.0). That’s not a borderline Hall of Famer, that’s an inner circle one."

The key takeaway here, aside from the fact that Piazza is a clear-cut, first-ballot Hall of Famer, is that the most advanced tools we have are indeed useful, but only when their user understands how to implement them. As much as we all laud WAR and it's ability to concisely summarize an entire season/career/player into one elegant number, it is flawed. We know this.

Again, I give Davidoff a lot of credit for incorporating a far more analytical approach, firmly against the tide of the old school of thought. Additionally, right or wrong it allowed for a far more interesting discussion than the addlepated PED stance. The inclusion of WAR is certainly an excellent stepping stone in raising the bar of those enshrined in the Hall. But it is just that, a stepping stone.