Share All sharing options for: This is -- New York Mets -- Jeopardy!

At the risk of outing myself as a complete and utter nerd, I will share the fact that one of my favorite hobbies outside of deriving obscure baseball statistics and watching low-level minor league games is watching a lot of Jeopardy!. Besides Mets games, 'the classic thinking man's game' is one of the only things I watch on a truly regular basis.

So what better for a nerd like me than when these two interests cross paths? And you may in fact be surprised at how often that happens. Jeopardy! writers have always done a good job mixing sports into their panoply of useless factoids and the Mets have certainly had their fair share of attention.

Below is an infographic reflecting all of the questions in Jeopardy! history -- dating back to the inception of the current "Trebek" version in September 1984 -- relating to the New York Mets in some way, shape or form* (click image to embiggen...a lot): 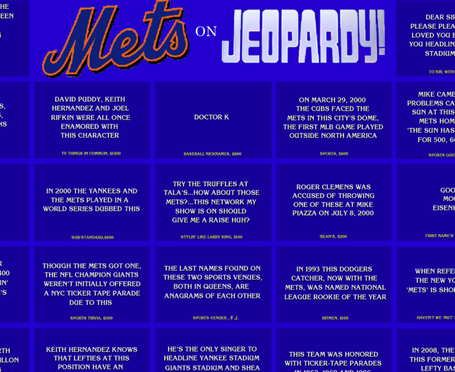 *For the record, there was some of my own judgment involved including questions that only related to the Mets on an ancillary basis (i.e. any question involving Yogi Berra, Casey Stengel, etc.)

And in the spirit of 'America's favorite quiz show', here are a few useless, random bits of information regarding these questions/answers:

**I must point out that none of this would be possible without the invaluable (and incredible) J! Archive, the Baseball-Reference of Jeopardy!