The consensus seems to be that Marlins Ballpark's home run celebration machine is tacky, over-the-top, nonsensical, and just plain awful. All of those adjectives are accurate, except for "awful", which should be replaced with "awesome." Here is the beautiful monstrosity, nearly completed: 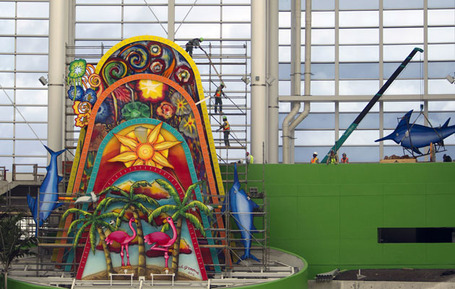 Professional baseball is entertainment. It offers a chance to see things which can't be seen on the average little league or high school field. Think 400+ foot home runs, 99 mph fastballs, and trips from home to third in under nine seconds. Smallball and players trying really hard can be seen on a baseball field at any level, so I don't tune in to MLB to watch bunting and I couldn't care less if a player spends 18 hours a day in the batting cage if he's hitting .210. Part of the entertainment experience is the setting in which the game is played. Now, I can enjoy myself at any MLB game no matter the stadium. Baseball, hot dogs, beer, and hanging out with friends and family is tough to screw up. But forgive me for thinking that stadium design has grown stale.

Oriole Park at Camden Yards opened in 1992 to nearly universal acclaim. It was the first of the "retro" stadiums, and its popularity led to the phasing out of the cookie cutter multi-purpose stadiums of the 1970s and 1980s. Every new stadium since Camden Yards has copied the superficially original design, because why mess with success? Tradition worship is a tenet of MLB culture. There is little room for drastic experimentation. Generally, these retro stadiums are improvements over their predecessors -- Citizens Bank Park > Veterans Stadium, for one -- but outside of some minor quirks there is nothing terribly different about them. Turner Field is Nationals Park is Citi Field, although Citi boasts the timeless Home Run Apple, a touch of personality in another HOK Sport clone job.

Enter Marlins Ballpark and the Moulin Rouge-esque home run contraption. It is more adventurous than any current MLB stadium amenity, rivaled only by the backstop aquarium about 400 feet away. Imagine Mike Stanton crushing a home run to center field, then rounding the bases accompanied by the sights -- and sounds -- of the Marlins' own Bazooko Circus. It's just awesome, in the way that Death Wish III, Mark McGwire taking batting practice, or a performance of 1812 Overture with live cannon fire is awesome. There is no pretense of tastefulness, and that's okay. Not everything in baseball has to be Vin Scully. There is room for Bill Veeck. And it'll probably annoy Bob Costas, so there's that.

I want to hate all things Marlins -- especially considering the crony capitalism and theft of citizens' dollars which were integral for building Marlins Ballpark -- but I have to admire the home run celebration machine for the absurd spectacle that is is. Do I want every team erecting their own? Not necessarily, but some fresh architectural and attraction ideas in MLB would be welcome. I have lofty expectations for the Mercury Mets' stadium.

So here's hoping for further innovation in stadium design. And also an epic letdown of a season from a team managed by a guy who regularly tweets things like this: