On Baseball and Boyfriends

Share All sharing options for: On Baseball and Boyfriends

So Baseball Boyfriends then.

In our accelerated internet mediascape, this story has already been pored over form every conceivable angle. Part of me believes that something as laughable as Baseball Boyfriends is its own punchline, and that women who feel offended by it don't need me to mansplain or express outrage on their behalf. However, I do feel compelled to write about it briefly anyway, because of two people in my life.

The first is my mom. I would not be a baseball fan were it not for her. My dad couldn't have cared less about spectator sports, save the games his kids played in, but my mom is a huge baseball fan. At her job, where she has email but no web access, I send her detailed in-game updates every time the Mets play a weekday day game. She lives and dies with them, but in a healthy way, if that's possible. She will never miss a game if she can help it and gets very upset when they lose. ("Those STUPID Mets!" was a frequent refrain in our house growing up, particularly during the Jeff Torborg/Dallas Green era.) But once a game is over, she quickly recovers and looks forward to the next one.

She comes from a generation that neither expected nor acknowledged female fanhood. She was not wooed to the game of baseball by any outreach on MLB's part, sexist or otherwise. She simply had the luck of growing up in Queens in the 1960s, when it was nearly impossible to not like the Mets, even when--especially when--they were terrible. But I wonder if something equivalent to Baseball Boyfriends had existed then, if she wouldn't have just said screw this and written off the sport entirely, since it is a game that seems laboratory engineered to annoy her, and millions of other women, I'm sure. 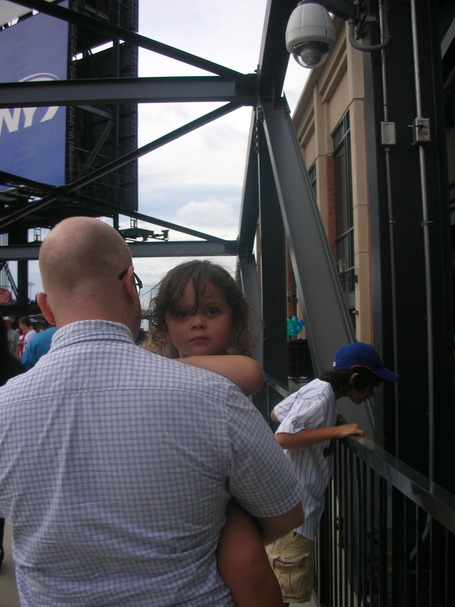 The second person is my daughter. She likes baseball, loves going to CitiField, and has said more than once this offseason that she misses Jose Reyes. (I'd rather tell her there's no Santa Clause than tell her about what happened to Jose.) She's also told me, "Nobody else on the school bus likes the Mets, but I do," thus indicating a precocious ability to resist school bus peer pressure.

But she also gets constant cues from the outside world that there are boy things and girl things. She definitely does not get these ideas from home. They are simply Out There; finding this out was an early, crushing lesson in how much you as a parent can not control. Personally, I don't want to raise my child to think there are things she can't do, even if it's a boy thing. I'd prefer she believe the sky is the limit and feel free to choose whatever path she wants. Despite me constantly telling her that she can do anything she wants to do, she will still ask me if girls can do Thing X, or that boys can't do Thing Y.

Like any parent, I simply want my daughter to find happiness. I couldn't care less whether she dreams of growing up to be a pretty pretty princess or a shutdown closer. I do care that she might think only of one of those things is possible.