For today's 'Baseball Card of the Week' we'll take a look at a little known Met with this 1993 Donruss Bill Pecota card: 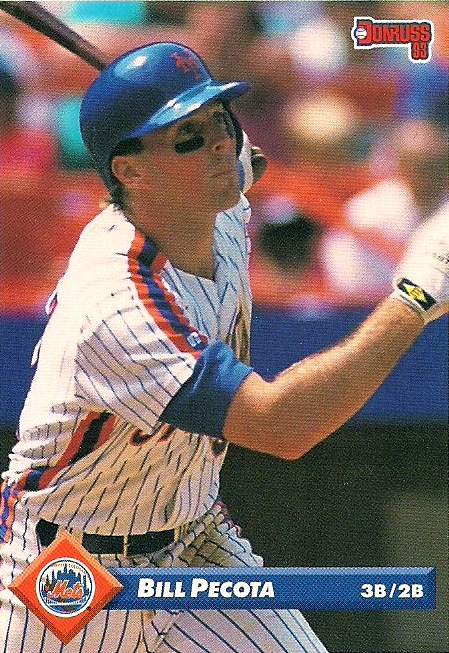 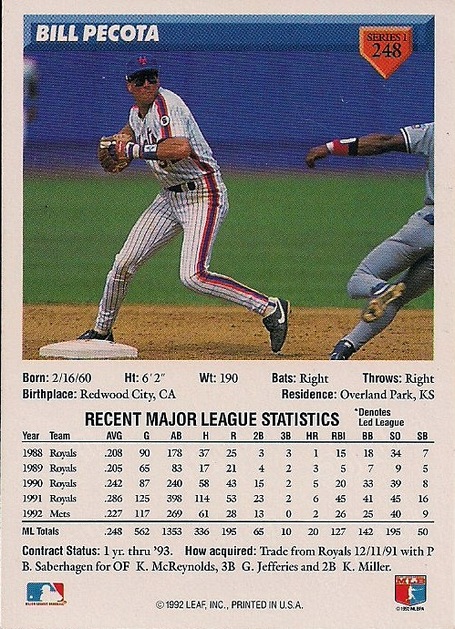 In fact, for the younger generation spring training mentions of Pecota have to do more with projection systems than actual players. But Bill Pecota was indeed a player (and the namesake for the proprietary Baseball Prospectus projection algorithm...why they'd choose such a forgettable player is another question).

However, forgettable-ness is relative. After producing 6+ WAR in a six-year stretch for the Royals between 1986 and 1991 -- including a 2.8 WAR in 1991 -- Royals Review considered the utility infielder the 66th greatest Royal of all time. Not only that but our own Rob Neyer even considers Pecota his all-time favorite player. Hell, he even went on to a moderately successful bass-fishing career after baseball.

On the field Pecota was never a star, but he was the textbook definition of a useful ballplayer. And in his first and only season as a primary starter (1991) he was downright decent, batting .286 with six homers, a nearly 1:1 K-to-BB rate and superb defense at third base. As a gritty, hard-working utility man beloved by fans -- and nicknamed I-29 for his constant shuttling between Kansas City and their Triple-A club in Omaha -- Pecota was the McEwing of the Midwest.

Which is why he was included as the secondary piece in the blockbuster trade that brought two-time Cy Young winner Bret Saberhagen to the Mets during the winter meetings of '91. The trade has gone down as a disaster for all parties involved -- Saberhagen would battle injuries for the rest of his career, Jefferies continued to underwhelm, McReynolds fell off the cliff at age 32 -- and Pecota was no exception.

Unfortunately, being relegated back to super-sub status wasn't the answer for Pecota who really struggled in '92 as the primary utility infielder for a Mets team that would lose 90 games. He'd bat .227 with a .590 OPS in his only season with in New York before moving on to the Braves for a couple years, then retirement, then bass.