Share All sharing options for: Can Daniel Murphy Play Second Base, Part 37

If you watched yesterday's game against the Marlins, you may have noticed an awkward moment in the top of the third inning. With men on first and second and one out, Johan Santana wheeled around and fired a pickoff attempt to second base. Daniel Murphy covered; see the results below: 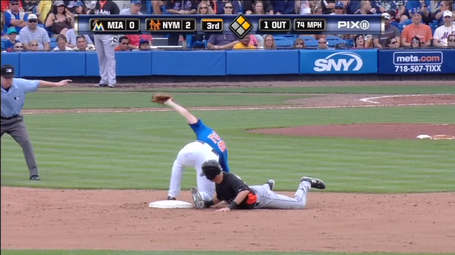 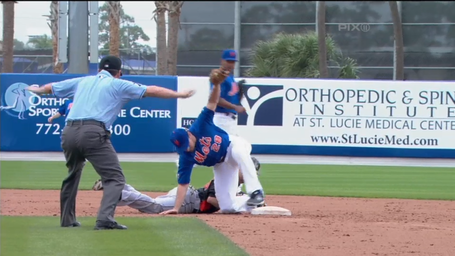 As you can see the runner was safe, but that's not the issue. The real trouble here -- as Ronnie pointed out on the broadcast -- is that you can clearly see that Murph put his right knee down directly in front of the bag, right in harm's way.

In this case the baserunner just happened to slide back head first, but as Ronnie mentioned, Murphy will not always be so lucky. In fact, he went on to suggest that Ozzie Guillen likely noticed the snafu and will probably be instructing baserunners to go back spikes first against Murphy from now on.

Now, you can say that Santana's throw wasn't perfect, much like the throw (from Ronnie Paulino) that put Murphy in harm's way last season. But that's exactly the point: throws will not always be perfect. You can say any second baseman might make this mistake and if it's anyone else we wouldn't even blink. But this isn't anyone else; this is a guy who's had two separate seasons ended due to defense-related knee injuries at second base, so this sort of thing is relevant.

As we all know, this is not a new phenomenon with Murph. We had a similar discussion when his season was cut short on a play around the bag last summer. Anyone who caught the Spring Training video journals probably noticed Murpy's less-than-natural footwork turning double play drills. In short, he's not a great defender at second and he probably never will be, but here's hoping that he can improve enough this season that we won't see a repeat of last year.