Like Angel Pagan, the player from whom he was traded, Andres Torres spent a long time in the minor leagues before cracking a big-league roster as a regular player. Torres didn’t sign with the Marlins when they drafted him in 1997 but did sign with the Tigers a year later. He was part of Detroit’s organization until he was let go early in the 2004 season. At the time, he had only made 264 plate appearances with the Tigers. In his limited time, he hit .214/.264/.282, and he hadn’t shown much promise with the bat in the minors.

From there, Torres became a perennial free agent. He was picked up by the White Sox a few days after he was dropped by the Tigers in 2004. At the end of the season, he hit free agency and signed with the Rangers, who released him in June the following year. The Twins picked him up after the 2005 season, he again signed with the Tigers during spring training in 2007, and he signed with the Cubs following that season. Throughout the game of human pinball that was his life over those four seasons, Torres had only one cup of coffee to show for it, a twenty-one plate appearance stint with the Rangers in 2005.

Torres finally got another real shot in 2009 after signing with the San Francisco Giants, his sixth organization. While he spent some time in the minors again and only had 170 plate appearances with the Giants, Torres raked to the tune of a .379 wOBA in his age-31 season. He then appeared in 139 games in 2010, posting a .363 wOBA, hitting 16 home runs, and stealing 16 bases at a success rate of 78.8%. Last year, however, Torres was disappointing at the plate. His .296 wOBA was a major drop from his performance in the season-plus he had played with the Giants. On the upside, the defensive metrics loved his play in the outfield – mostly in center – throughout his years with the Giants. 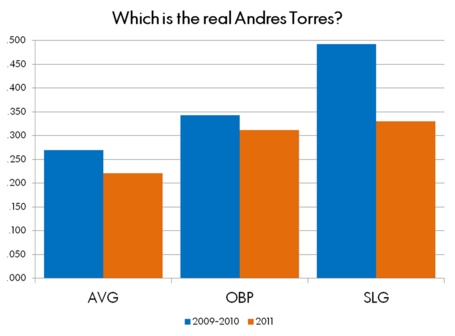 So long as Torres continues to play an excellent center field, he can provide value for the Mets this season. If Terry Collins intends to use him as the leadoff hitter for an extended period of time, though, he’ll have to bounce back from his down year at the plate last year. Even then, his .343 OBP over the 2009 and 2010 seasons wasn’t exactly spectacular. Much of Torres’ offensive success was a result of his ability to hit for extra bases. Generally speaking, the projections for this season have Torres around a .315 wOBA. If that’s the case, he should probably not be atop the Mets’ batting order, but he can still have a good year.