When the Fourth Estate Pleads the Fifth

Share All sharing options for: When the Fourth Estate Pleads the Fifth

Carlos Beltran's return to Port St. Lucie in a Cardinals uniform prompted many questions from the press about the current state of the Mets. Highlights: He said "god only knows" when the team will compete again, although he still thinks they're tops in the catering department.

Beltran's appearance also prompted some soul-baring from ESPNNY's Adam Rubin, who's been doing a lot of that since last offseason. The occasion of Beltran's visit, plus a random tweet on the subject, caused Rubin to revisit the Walter Reed kerfuffle of 2010, and defend the press's role therein. (Tweets chronological from bottom to top.) 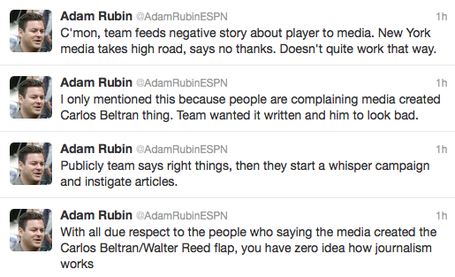 Similar to the last time he unburdened himself, here Rubin tweets about his frustration over what he knew about a past incident vs. what most people assume about that incident, while also questioning how much the press is to blame for the Walter Reed Affair being blown completely out of proportion.

This isn't anywhere near as damning as Rubin's last Twitter revelations concerning the depths of the Mets' idiocy about their players' injuries. And it isn't all that revelatory, either. It's always been an open secret that Mets ownership actively tried to defame Beltran as revenge for him getting knee surgery without their permission (except that he thought he had their permission; as with everything else involving Mets ownership, the truth is murky). The tweets do, however, reveal something about how the sports press works, or believes it must work.

Rubin contends it would be naive to expect reporters to ignore a story like this, especially in New York with all its hungry tabloids. However, the issue has very little to do with reporting the story per se. The real problem, as I saw it at the time, was the initial reports about the Walter Reed incident took the "whisper campaign" at face value. It was unquestioningly reported that Beltran hadn't shown up with his fellow Mets, and that was that. In these early stories, he was mentioned alongside Luis Castillo and Oliver Perez, two players who simply couldn't be bothered to show up to this event, thereby implying that Beltran was similarly callous.

Only later was it reported that Beltran didn't show because he was attending to his own charity, that he'd visited VA hospitals in the offseason, and that he expressed some regret he was unable to go to Walter Reed with his teammates. No matter. The damage to his reputation was already done, the WFAN phone lines lighting up with angry fans questioning his patriotism. (I heard more than one caller say Beltran was "ungrateful" for what baseball allowed him to do in "this country," apparently forgetting that Beltran's native Puerto Rico is actually a part of the USA.) Even the "final" stories on the subject were rather faint in their efforts to absolve Beltran of any "wrongdoing." (See the Daily News and the Post for examples.)

Rubin says the press can't be expected to not report a story, even if it's an obvious whisper campaign. But the press can and should be expected to report a story in full. If an item appears to be a hatchet job by Mets brass, then reporters should perform due diligence and at least attempt to get all sides of that story before filing. In this case, that effort was made poorly, if at all. Maybe this happened because of the rush to be first, or the accelerated news cycle of the internet age. Whatever the reason, it happened nonetheless, and it shouldn't have.

The only reason I can come up with as to why this story was put out there unquestioned is because it came straight from ownership. So failing to report the "story" could not only mean getting scooped, but losing access as well. I understand that in journalism access trumps all, but what good is access if all it buys you is closer proximity to lies, half-truths, and axe-grinding? And what is a reporter's job if not to question the "official" story? In the case of the Walter Reed incident, there was precious little reporting and a whole lot of dictation.

If everyone in the press was aware the Mets' true intent in spreading this story was to make Beltran's life more difficult, surely a little more skepticism was warranted. Instead, the newspapers repeated the team's storyline verbatim. In my book, that does make them culpable in the ensuing "overreaction."

For a member of the media to say they're not to blame for the disproportionate blowup of a story they knew full well was disseminated for purely Machiavellian motives is disingenuous at best. It's like an instructor teaching material he knows is wrong solely because the textbook company says it's right, then refusing his share of the blame when the entire class fails.