Let's expand this thing a bit into our first full-fledged Farm Report of 2012; as minor league schedules get underway we've got more content to discuss than a tiny FanShot can hold.

So our first bit of interest comes from the major league side, where the Mets clobbered the Astros yesterday by the score of 8-2. But more importantly for us was the defensive assignment in center field for the final couple of innings: 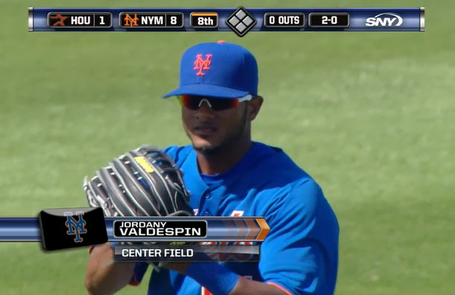 That's right, chatter about trying Valdespin in center was confirmed yesterday as Terry shuffled the 24-yr old career infielder out to man center in the eighth inning. And wouldn't you know it, the very first ball was hit his way, a moderately tough line drive which drove him back a bit. Ultimately, he made the play with relative ease and showed that while he's likely a long shot to ever actually play the center in the majors, he clearly possesses the athleticism needed to man the position should the Mets need more options.

And speaking of other options, the Mets reeled in Matt den Dekker from the minor league side yesterday. MDD got the start in center and went 0-for-3 with a couple of runs and a strikeout. 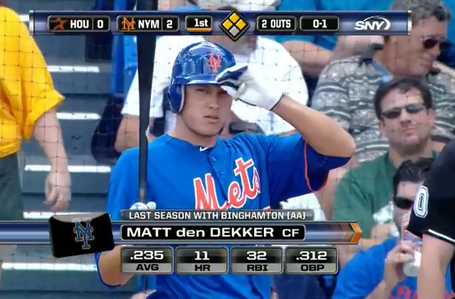 We're seeing den Dekker for two reasons: 1. Guys like Juan Lagares, Kirk Nieuwenhuis and Cesar Puello -- who are all on the 40-man roster -- are all off-limits for the duration of spring now that they've been sent to the minor league side. However, den Dekker does not carry that same distinction so he can shuttle back and forth. And 2. Defensively-speaking, he's the best option in the Mets organization right now, which probably includes a healthy Torres.

While MDD was added, the Mets cut Josh Satin, Omar Quintanilla, Fernando Cabrera and Chuck James back to the minor league side. That leaves just a few more contenders in the battle for first lefty out of the 'pen while Byrdak heals, Garrett Olson, Danny Ray and the intriguing Josh Edgin. Edgin pitched yesterday and was once again very effective. 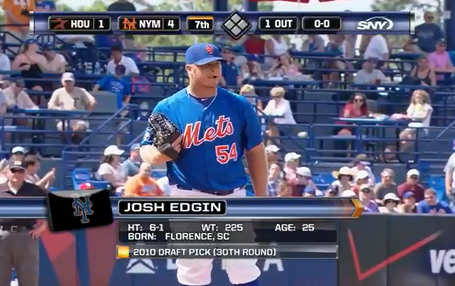 On the spring the 25-yr old lefty has posted a sterling 0.00 ERA in 6 outings (5.2 IP), allowing just two hits, two walks and eight strikeouts. Especially with the spring success of would-be favorite Garrett Olson, it's unlikely Edgin makes the jump from Hi-A directly to the show but he's certainly opening eyes. At this point it'd be damn impressive if he could force his way to Triple-A and from there he wouldn't be more a than a strong month or two from Queens.

Now let's get to the actual minor league action from Wednesday:

*All results from games played on Wednesday, March 22 2012

Once again, details are sparse when it comes to A-ball action but the Nimmo played well, going 3-for-4 with a walk. Additionally, OF Eudy Pina was the hitting star in this one going 2-for-3 with a 3-run jack and 6(!) RBI's. The 23-yr old Pina was one of my under the radar picks for 2011 and though he disappointed in his first exposure to GCL pitching, his excellent athleticism keep him at least marginally interesting. Phillip Evans also manned short in this game while LHP Angel Cuan, RHP Nick Carr, LHP Roy Merritt and RHP Michael Powers pitched.