2012 Mets Defense Will Be Bad, Does That Matter?

Share All sharing options for: 2012 Mets Defense Will Be Bad, Does That Matter?

On Wednesday night Eric wrote a short piece about the increasingly poor defense of the New York Mets. The central idea being that the Mets were bad at defense in 2011. And according to...well like Eric said, just about everybody they're likely going to be even worse this coming season.

I'm not here to argue that. It's clear that the Mets were indisputably bad with the leather in 2011, ranking near the bottom in most defensive metrics from Defensive Efficiency to Fielding Percentage. And things don't look much better this spring. You can make the argument that Tejada may represent a slight upgrade over Reyes. However, David Wright is in the midst of a long, slow decline. And a full season of Lucas Duda in right could potentially be a scary thing. Plus, Daniel Murphy.

My contention is, does it really matter? And I don't mean 'does it matter' in the sense that the Mets will lose 110 games and they'll be so bad that who cares how they lose. I mean it in the sense that if they actually want to be competitive in 2012 and perhaps take a shot at that new Wild Card spot at the very least, does it matter that they're almost sure to run out a pretty crappy defensive unit?

A couple weeks back Christina Kahrl of Baseball Prospectus posted a very interesting excerpt from the upcoming sequel to BP's Baseball Between the Numbers, in which she discusses the effects of the increase of strikeouts in today's game. There's a lot of interesting stuff there but here's the key takeaway for our purposes:

"Love the strikeouts not merely for their own sake, but for their impact on team offenses and defenses. Playing slugs like Aubrey Huff or Lance Berkman in an outfield corner, or Derek Jeter or Skip Schumaker up the middle, is an increasingly affordable risk—with the right pitching—and as long as you're getting enough offense."

An "affordable risk". Makes sense too; Batters strike out more : balls are put into play less : defense isn't as important (so let the slugs slug for God's sake).

Now you may have noticed that there were a couple of qualifiers in there in order to "afford" bad D:

Qualifier No. 1: "As long as you're getting enough offense."

This much is clear, the Mets lineup definitely doesn't strike fear into the hearts of NL pitchers. For one, they lack any definitive star-level hitter -- in the parlance of the esteemed Keith Hernandez, a "big bopper". In the past calendar year they've lost two such hitters, the top two offensive contributors on the club, while also witnessing the continued decline of their de facto franchise player. This is why the masses don't like the Mets lineup.

However, I've enjoyed surprising the masses all winter with the fact that the Mets ranked sixth in the league in runs last season. Ahead of teams like the Phillies or Braves and less than 50 runs behind the league-leading Cardinals. 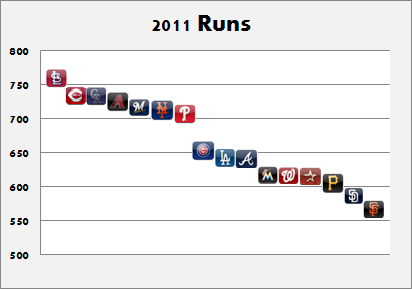 And there is reason to be optimistic for improvement -- or at least similar output -- in 2012. Indeed losing Beltran and Reyes hurts, but they contributed little or nothing in the second half of 2011. Declining though he may be, Wright is still a strong offensive contributor who missed nearly 40% of 2011. Ditto the full season effect for Daniel Murphy -- who missed a similar amount -- and Ike Davis -- who missed nearly twice as much. Not to mention tangible development from younger players like Duda and Tejada. On the surface, the fences moving in will help score more runs but that's more a zero-sum game as the opponents benefit from that one as well.

Even still, the Mets are a decent bet to score a good amount of runs in 2012.

Qualifier No. 2: "With the right pitching"

In the article, Kahrl identifies the "right pitching" as pitching that excels in limiting contact. He finds examples in teams like the Giants and the Yankees, both of whom have ranked among the league leaders in strikeouts for years. Obviously the Giants have leaned heavily on names like Lincecum, Cain and Sanchez while the Yankees targeted guys like C.C. Sabathia and A.J. Burnett to bolster their starting staff.

The problem is that the Mets strength in 2011 was more about quantity than quality. In fact, the Mets main five starters in 2011 (Dickey, Niese, Pelfrey, Capuano & Gee) made 92% of the starts, a pretty incredible feat. However, they placed 13th of 16 in ERA and more importantly for our exercise 10th in strikeouts.

Additionally, the cast of characters hasn't changed much. Yes, Johan could very well provide a boost but he doesn't strike 'em out like he used to. In fact, the last season he matched Capuano's 2011 8.1 K/9 was in '07 with Minnesota. Maybe we'll see a step forward from Niese but even so the starting staff likely won't look that much different in 2012.

However, all is not lost. In dissecting the rise of the K, Kahrl states:

"...the real key to the spike in strikeout rates has been the relievers, as they've reached 7.5 K/9 while pitching a larger portion of every ballgame...Generally speaking, the benefits of using more relievers are clear: it makes it hard for the batter to get used to any one pitcher's stuff or pitching pattern...bullpen assembly and management is more important than ever. As tedious as the endless shuffle of men from the pen might be to witness...the recent success of bad defensive teams with deep pens and strong lineups might provide a template..."

So the key to salvation lies not necessarily with the starters, but in the bullpen. Well that's good because while we know the Mets didn't do much this offseason, what they did do revolved around the relievers.

We also know that the Mets 2011 'pen gave us quite a bit of room for improvement. Guys like Pedro Beato and D.J. Carrasco -- both of whom placed in the top five among Mets relievers in innings -- featured a K/9 at or below 5. And like the offense, the top reliever didn't make an impact in the second half.

Swap out the aforementioned two for newly-added relievers Ramon Ramirez (8.7 '11 K/9) and Frank Francisco (9.4 '11 K/9) and you're already looking at a heck of a lot more missed bats. When you continue to swap back of the 'pen options like Thayer and Stinson for far more capable ones like Rauch and Olson you've got even more gains. Some simple back of the envelope math brings you from a mid-7 K/9 from 2011 up to a low 8.

That is without any sort of development from 26-yr old Bobby Parnell -- who is killing the Grapefruit League and was already at 9.7 in '11. Additionally any sort of incremental benefit from a full season of sudden mainstay Manny Acosta. Any way you slice it it's clear to see that there's a lot of potential for improvement in terms of the strikeout, if not the overall performance.

So that brings us back to the defense. Once again, we know it's going to be bad this season, I won't argue that point. We know because they were awful in 2011. How awful? Worst in all of baseball in UZR by a wide margin awful: 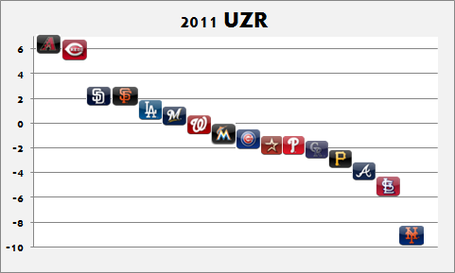 Ugly. But take note of one thing: Look at the two teams directly ahead of the Mets. Not just the Braves -- who for all intents and purposes were a playoff-caliber team in 2011 -- but also the eventual World Series Champion Cardinals.

Well the Braves absolutely fortify the above theory, leading all of baseball in strikeouts in 2011. They couldn't play defense and for the most part it didn't matter -- though I imagine that costly seventh inning error by Jack Wilson during game 162 probably smarted a bit.

The Cardinals are tougher to peg. Obviously they had a lot of luck in 2011 to do what they did. But they didn't strike a lot of guys out on the whole. In fact, they actually placed a few slots below the Mets. Yet, as I stated above you've got to have the the runs to make up for shoddy defense and obviously they did. And if you look closer, it starts to make sense as they rank at or near the top in K's with men on base, bases loaded, etc. Basically they were good/lucky at striking guys out when it mattered most.

So what to take from all of this if you're a Mets fan? Bottom line, the defense is going to be bad; maybe real bad. Does that mean the end of the 2012 season before it even begins. Not necessarily. There's a good chance Mets batters are going to score a lot of runs. There's a good chance Mets pitchers are going to strike out more batters. Will those factors in and of themselves make this team a contender? No, they probably won't. But as we saw from some previous examples, it can certainly help the cause and chances are the Mets will need all the help they can get this season.