The Mets are an organization with a fairly rich history behind the plate. Gary Carter, Mike Piazza, and, to a slightly lesser extent, Todd Hundley set the bar high for offense. Outside of Paul Lo Duca’s great year in 2006 and the power from perpetual backup Ramon Castro, the team’s catchers have generally been abysmal with the bat since the days of Piazza.

The Mets took Josh Thole in the thirteenth round of the 2005 amateur draft. He didn’t play much professional ball that year or the next, but his 2007 season with A-ball affiliate Savannah was unimpressive. In 2008, however, Thole got on base at a .382 clip with St. Lucie. He followed up that campaign with a .398 on-base percentage in Binghamton in 2009. Although he didn’t hit for much power, Thole looked like he could provide some value at a position where offense is relatively weak in the big leagues.

As a result, Thole got a cup of coffee with the Mets at the end of the lost season of 2009. He started his 2010 season in Buffalo but rejoined the Mets in late June, racking up slightly more plate appearances with the Mets than the Bisons. Last year was Thole’s first full season in the big leagues. Over the course of his time with the Mets, he has hit .276/.350/.344. The drop in Thole’s OBP can be attributed almost entirely to his lower batting average. In his last two full seasons in the minor leagues, Thole posted BABIPs well over .300, and that is rarely sustainable at baseball’s highest level. He has, however, maintained the ability to draw a walk. And while Thole didn’t hit for much power in the minor leagues, he’s been virtually unable to hit for any yet with the Mets. 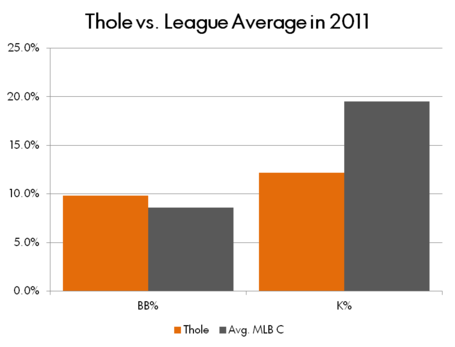 While there are no current candidates in the Mets’ system to replace Thole – there’s hardly anyone available to even back him up on the roster – this year could go a long way in determining whether or not the team sees him as its solution at catcher for the next few years. Without Ronny Paulino around to take up playing time, Thole should get the lion’s share of time behind the plate. That will allow the Mets to find out if he can improve upon what he’s done so far, and perhaps he’ll even get to face left-handed pitching. While the results against big league lefties have been awful so far, the sample size is so small that the numbers by no means indicated that he’ll forever be a liability against them in the future.