Share All sharing options for: How Important Were Johan Santana's Radar Readings

You may have heard that Johan Santana made a spring start and looked good. He sat 88-89 MPH and touched 90. His changeup danced. Everyone was smiles.

Was there any reason not to smile?

Apologies for being a wet blanket, but definitely maybe. Those radar gun readings were not all poops and popsicles.

Sitting 89 MPH would represent the lowest average fastball velocity of his career, a full four miles per hour down from his peak in Minnesota in 2006. Every year since that peak, he's lost about a half a mile per hour, and the trend has continued. From FanGraphs.com: 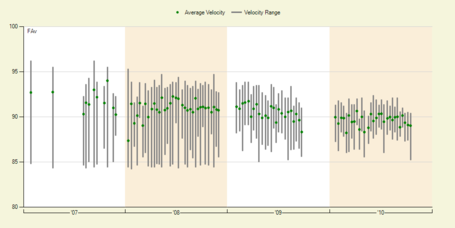 If the radar gun readings are worth putting stock in this early in the season. Are they?

They really might be. Check out this research by Jeff Zimmerman that shows that velocity stabilizes quickly. Like one start quickly. Check out the money shot, illustrated by helpful example Brian Matusz:

One game can explain 68% of the variation in fastball speeds. Three games and you get almost all the information you need. Per-pitch numbers stabilize much quicker than per-at-bat numbers.

Except it's spring, you might say. And that's a legitimate discussion -- many pitchers add velocity slowly as the spring proceeds.

For one, velocity peaks before 30 and generally declines swiftly. Or it's even worse -- velocity might decline from day one. So this decline is natural and part of the process of getting older. Very rarely does a pitcher add velocity back once the decline has begun.

His shoulder surgery complicates things. You could argue that the 2010 gun readings were affected by his shoulder problems and that he could regain 2008 levels of velocity (91.2 MPH average) if he really figured everything out.

The problem with this line of reasoning is that Zimmerman's research was aimed exactly at pitchers returning from the DL, so that's the sample he worked with. And if you look at pitchers that have had exactly the same surgery that Santana had, you're looking at Chien-Ming Wang. Wang missed 2010 with the capsule surgery and came back last year to pitch in 62.1 innings. His average velocity for those innings was a full two MPH lower than he'd shown so far in his career.

So we're left with the difference between the regular season and Spring Training -- if this was the regular season, we'd have the research and the comps to say with at least a 68% certainty that Santana would average 88-89 MPH on his fastball going forward.

If you're Johan Santana, coming off a full year not pitching in games, and knowing that this year is huge for the rest of his professional career, haven't you been working up to this moment as if it was a rehab start? In other words, wouldn't you be trying with nigh-regular-season effort? It doesn't seem like he'd be trying less hard than normal, does it?

Velocity is important. Each tick is worth a quarter run in runs allowed per nine, and strikeout rate decreases as velocity goes down. You can see it in Santana's numbers -- as his velocity has decreased, his swinging strike rate and strikeout rate have decreased. If you look at Santana's xFIP and SIERA numbers -- which normalize home run rates -- the decline has been stark. In 2010, his xFIP was below average. 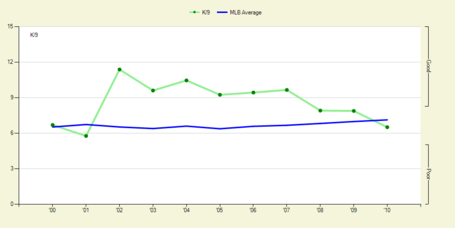 But Citi Field used to suppress home runs, and that helped his ERA stay low by keeping his home-run-per-fly-ball rate under league average with the Mets. Now? With the fences pulled in?

We can root for Johan Santana, especially since he's been a warrior in the past. We can hope that he can get by on the changeup and excellent control of the fastball. We can cheer him on -- we should.

But we all know how this age thing works, and most evidence points to the fact that those 88 and 89s we saw on the gun in his first start will be an all-too common occurrence this year. So it goes.