Return of the Saber-stat Series Preview: Mets vs. Phillies

Share All sharing options for: Return of the Saber-stat Series Preview: Mets vs. Phillies

I know what you are thinking and, yes, we are only six games into the regular season. However, as long as we understand that statistics at this point merely tell us what has happened and not, necessarily, what will happen, there is no reason to deprive ourselves of statistical-visual goodness.

So, behold, the return of the saber-stat series preview just in time for the first Mets-Phillies series of 2012: 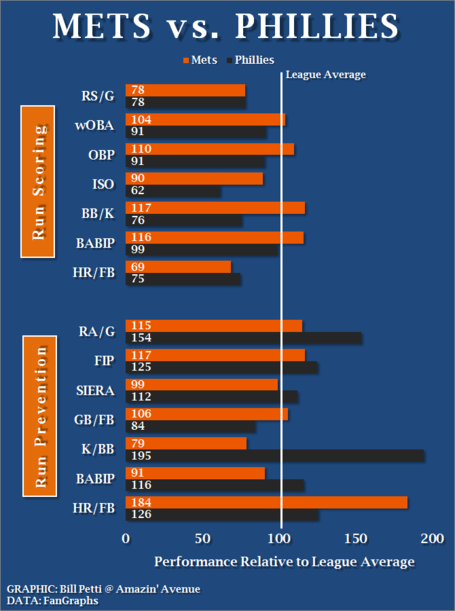 Remember, regardless of statistic, higher than 100 indicates the team is performing better than league average. Less than 100, worse. So, if a team has a runs against per game (RA/G) that comes in at 110, it means they are better than the league average when it comes to preventing runs.

After a fast start, the Mets stumbled in their past two games against the Washington Nationals. After a hot start to the season, David Wright missed the past two games with a broken pinky finger. It's unclear whether he's headed to the DL, but I can't imagine he will have to miss some time with an injury like that. Ike Davis, who I picked for breakout player of the year, has of course stumbled badly out of the gate. The good news is Davis connected for his first hit in Wednesday's game. The bad news is that teams seem to be taking the same approach to Davis and he has yet to adjust. Here's hoping that changes.

As for the Phillies, it was unclear if they would ever score this year, but after starting 1-2 against the Pirates they have turned things around, taking two out of three from the Miami Marlins. Chase Utley remains on the shelf with the same knee issue he dealt with last year, and a deadline for his return has not been set. And despite the offense only scoring 18 runs through the first six games, their run prevention has looked very good (not that this should come as surprise to anyone).

Without David Wright in the lineup, and with Ike Davis and Jason Bay continuing to struggle, I am finding it hard to call this series for the Mets. The Phillies will have Cliff Lee, Vance Worley, and Cole Hamels taking the hill over the weekend. I'll say the Mets lose game one, take game two, and continue their success against Hamels and take the series in game three--pretty much what James said.

Be sure to check out The Good Phight and Crashburn Alley for great Phillies coverage and analysis.