Share All sharing options for: Jon Niese Dominates And David Wright Homers In Shutout Of Phillies 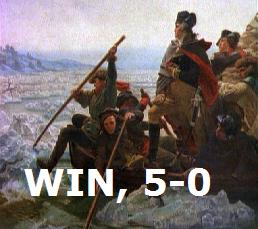 Any worries about David Wright's fractured pinkie were assuaged with one pitch today in Philadelphia. He hit a 420+ foot solo home run to center field on the first pitch he saw from Vance Worley in the first inning. It proved to be all the offense the Mets needed, as Jon Niese cruised through 6.2 shutout innings and the bullpen locked it down the rest of the way to close out a very satisfying 5-0 win. It was Wright's first game since Monday, following a week of talk about a possible trip to the disabled list. For now, that discussion is tabled.

Niese was a joy to watch. His curveball was on -- 15 of the 20 he threw went for strikes -- and he induced 10 ground-ball outs compared to 5 fly-ball outs. The only time he allowed more than one baserunner in an inning was in the first, when he gave up back-to-back singles to Placido Polanco and Jimmy Rollins with one out. But he coaxed a ground-ball double play off the bat of Hunter Pence on the first pitch to quickly extinguish that rally.

Niese struck out five and walked one, exiting with two outs in the seventh, a runner on first, and pinch hitter Carlos Ruiz stepping up to the plate. Bobby Parnell came on in relief throwing controlled gas and retired Ruiz on a fly ball to center fielder Kirk Nieuwenhuis. Captain Kirk had a nice game, going 1-for-4 at the plate and making a terrific catch on a drive to the right-center field wall by Brian Schneider in the second inning. Extra-base hits are rare for Schneider, so Niese was spared the embarrassment. Parnell worked a scoreless eighth inning and Jon Rauch followed with a perfect ninth.

Wright led the offense, going 3-for-5 with two singles in addition to that first inning home run. Considering the early season struggles of middle-of-the-order beefcakes Ike Davis, Jason Bay, and Lucas Duda, Wright's powerful return was welcome. Duda also woke up from a week-long slump, going 2-for-4 with a two-run home run and a double. Ruben Tejada continued doing his best to make us forget about what's-his-name by hitting two singles and playing strong defense. His ability to lay off pitches out of the strike zone at such a young age must have Sandy Alderson, J.P. Ricciardi, and Paul DePodesta grinning ear-to-ear.

By the ninth inning, it looked like half the stadium had fled for the exits. It was the type of game that makes you want to high five everyone around you and have a beer. A sweep would exceed weekend expectations but given how anemic the Phillies offense looks it's not out of the question. Mike Pelfrey will try to make it happen at 1:35 pm tomorrow against Cole Hamels.

"Du will not hasst this spring seasonal which has a slight taste of honey. It goes down easy despite the relatively high ABV, so be careful to drink in moderation. Perfect for celebrating a Mets shutout." -- My review