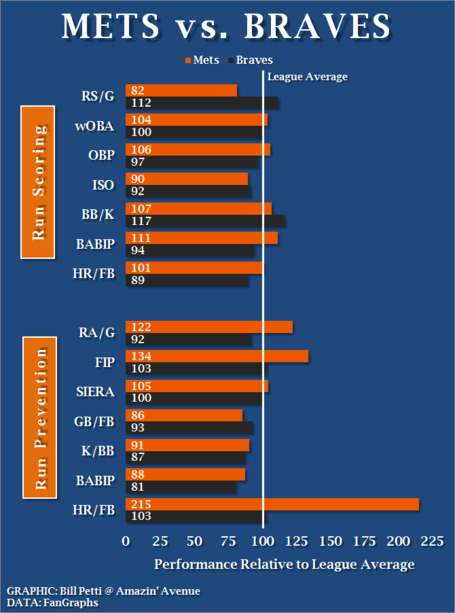 After taking the weekend series against the Philadelphia Phillies, the Mets (6-3, .5 GB) travel to Atlanta to begin a three-game series against the Braves (5-4, 1.5GB). The Mets managed to sweep the Braves in the first series of this young season, but since then the Braves have gone 5-1, taking two out of three against the Astros before sweeping the Milwaukee Brewers. Oddly enough, the Braves rode their bats to five straight victories while their pitching and defense has left much to be desired early on.

Meanwhile, the Mets have scored runs at a below average pace to start the season, but have done a very good job at preventing runs. Despite a few meltdowns here and there, the pitching and defense has been a pleasant surprise. If nothing else, the staff has decided that giving up home runs is just plain silly, and that's turned out to be a great strategy.

Be sure to watch how the Braves approach Ike Davis in this series and how he performs. Davis struggled mightily against the Braves and Tommy Hanson in particular last time, allowing himself to be eaten alive by a barrage of off-speed offerings and pitches down and away. Ike did have three hits over the weekend, one being a home run off Cole Hamels in yesterday's loss (which was on a pitch decidedly not down and away). However, I am looking at this series for signs that Davis is making the necessary adjustments at the plate.

With pitching (oddly) favoring the Mets and offense seemingly even, I'll say the boys from Queens stay hot and take two out of three from the Braves.

Be sure to check out Talking Chop and Capital Avenue Club for excellent Braves coverage.